In physics, circular motion is a movement of an object along the circumference of a circle or rotation along a circular path. It can be uniform, with constant angular rate of rotation and constant speed, or non-uniform with a changing rate of rotation. The rotation around a fixed axis of a three-dimensional body involves circular motion of its parts. The equations of motion describe the movement of the center of mass of a body.

Examples of circular motion include: an artificial satellite orbiting the Earth at a constant height, a ceiling fan's blades rotating around a hub, a stone which is tied to a rope and is being swung in circles, a car turning through a curve in a race track, an electron moving perpendicular to a uniform magnetic field, and a gear turning inside a mechanism.

Since the object's velocity vector is constantly changing direction, the moving object is undergoing acceleration by a centripetal force in the direction of the center of rotation. Without this acceleration, the object would move in a straight line, according to Newton's laws of motion. 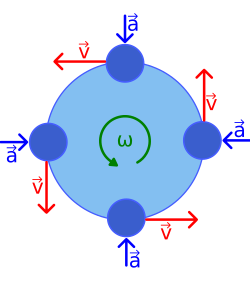 Figure 1: Velocity v and acceleration a in uniform circular motion at angular rate ω; the speed is constant, but the velocity is always tangent to the orbit; the acceleration has constant magnitude, but always points toward the center of rotation.

Figure 2: The velocity vectors at time t and time t + dt are moved from the orbit on the left to new positions where their tails coincide, on the right. Because the velocity is fixed in magnitude at v = r ω, the velocity vectors also sweep out a circular path at angular rate ω. As dt → 0, the acceleration vector a becomes perpendicular to v, which means it points toward the center of the orbit in the circle on the left. Angle ω dt is the very small angle between the two velocities and tends to zero as dt→ 0.

Figure 3: (Left) Ball in circular motion – rope provides centripetal force to keep ball in circle (Right) Rope is cut and ball continues in straight line with velocity at the time of cutting the rope, in accord with Newton's law of inertia, because centripetal force is no longer there.

In physics, uniform circular motion describes the motion of a body traversing a circular path at constant speed. Since the body describes circular motion, its distance from the axis of rotation remains constant at all times. Though the body's speed is constant, its velocity is not constant: velocity, a vector quantity, depends on both the body's speed and its direction of travel. This changing velocity indicates the presence of an acceleration; this centripetal acceleration is of constant magnitude and directed at all times towards the axis of rotation. This acceleration is, in turn, produced by a centripetal force which is also constant in magnitude and directed towards the axis of rotation.

In the case of rotation around a fixed axis of a rigid body that is not negligibly small compared to the radius of the path, each particle of the body describes a uniform circular motion with the same angular velocity, but with velocity and acceleration varying with the position with respect to the axis.

Figure 1: Vector relationships for uniform circular motion; vector ω representing the rotation is normal to the plane of the orbit.

For motion in a circle of radius r, the circumference of the circle is C = 2πr. If the period for one rotation is T, the angular rate of rotation, also known as angular velocity, ω is:

The speed of the object travelling the circle is:

The angle θ swept out in a time t is:

The angular acceleration, α, of the particle is:

In the case of uniform circular motion, α will be zero.

The acceleration due to change in the direction is:

The centripetal and centrifugal force can also be found out using acceleration:

The vector relationships are shown in Figure 1. The axis of rotation is shown as a vector ω perpendicular to the plane of the orbit and with a magnitude ω = dθ / dt. The direction of ω is chosen using the right-hand rule. With this convention for depicting rotation, the velocity is given by a vector cross product as

which is a vector perpendicular to both ω and r(t), tangential to the orbit, and of magnitude ω r. Likewise, the acceleration is given by

which is a vector perpendicular to both ω and v(t) of magnitude ω |v| = ω2 r and directed exactly opposite to r(t).[1]

In the simplest case the speed, mass and radius are constant.

Consider a body of one kilogram, moving in a circle of radius one metre, with an angular velocity of one radian per second. 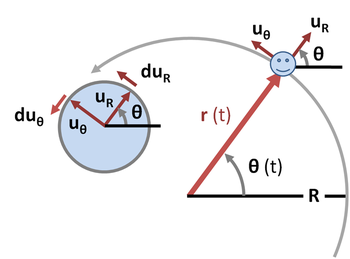 During circular motion the body moves on a curve that can be described in polar coordinate system as a fixed distance R from the center of the orbit taken as origin, oriented at an angle θ(t) from some reference direction. See Figure 4. The displacement vector <math>\vec{r}</math> is the radial vector from the origin to the particle location:

The velocity is the time derivative of the displacement:

Because the radius of the circle is constant, the radial component of the velocity is zero. The unit vector <math>\hat{u}_R(t)</math> has a time-invariant magnitude of unity, so as time varies its tip always lies on a circle of unit radius, with an angle θ the same as the angle of <math>\vec{r}(t)</math>. If the particle displacement rotates through an angle dθ in time dt, so does <math>\hat{u}_R(t)</math>, describing an arc on the unit circle of magnitude dθ. See the unit circle at the left of Figure 4. Hence:

The centripetal acceleration is the radial component, which is directed radially inward:

while the tangential component changes the magnitude of the velocity:

Circular motion can be described using complex numbers. Let the x axis be the real axis and the <math>y</math> axis be the imaginary axis. The position of the body can then be given as <math>z</math>, a complex "vector":

where i is the imaginary unit, and <math>\theta(t)</math> is the argument of the complex number as a function of time, t.

Since the radius is constant:

where a dot indicates differentiation in respect of time.

With this notation the velocity becomes:

</math> and the acceleration becomes:

The first term is opposite in direction to the displacement vector and the second is perpendicular to it, just like the earlier results shown before.

For a path of radius r, when an angle θ is swept out, the distance travelled on the periphery of the orbit is s = rθ. Therefore, the speed of travel around the orbit is

where the angular rate of rotation is ω. (By rearrangement, ω = v/r.) Thus, v is a constant, and the velocity vector v also rotates with constant magnitude v, at the same angular rate ω.

In this case the three-acceleration vector is perpendicular to the three-velocity vector,

and the square of proper acceleration, expressed as a scalar invariant, the same in all reference frames,

becomes the expression for circular motion,

or, taking the positive square root and using the three-acceleration, we arrive at the proper acceleration for circular motion:

The left-hand circle in Figure 2 is the orbit showing the velocity vectors at two adjacent times. On the right, these two velocities are moved so their tails coincide. Because speed is constant, the velocity vectors on the right sweep out a circle as time advances. For a swept angle dθ = ω dt the change in v is a vector at right angles to v and of magnitude v dθ, which in turn means that the magnitude of the acceleration is given by

In non-uniform circular motion an object is moving in a circular path with a varying speed. Since the speed is changing, there is tangential acceleration in addition to normal acceleration.

In non-uniform circular motion, normal force does not always point in the opposite direction of weight. Here is an example with an object traveling in a straight path then loops a loop back into a straight path again.

This diagram shows the normal force pointing in other directions rather than opposite to the weight force. The normal force is actually the sum of the radial and tangential forces. The component of weight force is responsible for the tangential force here (We have neglected frictional force). The radial force (centripetal force) is due the change in direction of velocity as discussed earlier.

In non-uniform circular motion, normal force and weight may point in the same direction. Both forces can point down, yet the object will remain in a circular path without falling straight down. First let's see why normal force can point down in the first place. In the first diagram, let's say the object is a person sitting inside a plane, the two forces point down only when it reaches the top of the circle. The reason for this is that the normal force is the sum of the tangential force and centripetal force. The tangential force is zero at the top (as no work is performed when the motion is perpendicular to the direction of force applied. Here weight force is perpendicular to the direction of motion of the object at the top of the circle) and centripetal force points down, thus normal force will point down as well. From a logical standpoint, a person who is travelling in the plane will be upside down at the top of the circle. At that moment, the person's seat is actually pushing down on the person, which is the normal force.

The reason why the object does not fall down when subjected to only downward forces is a simple one. Think about what keeps an object up after it is thrown. Once an object is thrown into the air, there is only the downward force of earth's gravity that acts on the object. That does not mean that once an object is thrown in the air, it will fall instantly. What keeps that object up in the air is its velocity. The first of Newton's laws of motion states that an object's inertia keeps it in motion, and since the object in the air has a velocity, it will tend to keep moving in that direction.

A varying angular speed for an object moving in a circular path can also be achieved if the rotating body does not have an homogeneous mass distribution. For inhomogeneous objects, it is necessary to approach the problem as in.[2]

Using <math>F_{net} = F_c\,</math>, we can draw free body diagrams to list all the forces acting on an object then set it equal to <math>F_c\,</math>. Afterwards, we can solve for what ever is unknown (this can be mass, velocity, radius of curvature, coefficient of friction, normal force, etc.). For example, the visual above showing an object at the top of a semicircle would be expressed as <math>F_c = n + mg\,</math>.