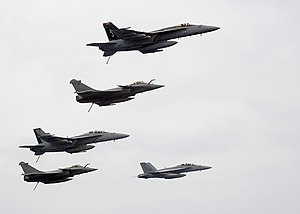 Carrier-based aircraft, sometimes known as carrier-capable aircraft or carrier-borne aircraft, are naval aircraft designed for operations from aircraft carriers. They must be able to launch in a short distance and be sturdy enough to withstand the abrupt forces of launching from and recovering on a pitching deck. In addition, their wings are generally able to fold up, easing operations in tight quarters.

The term is generally applied only to fixed-wing aircraft, as naval helicopters are able to operate from a wider variety of ships, including helicopter carriers and container ships. 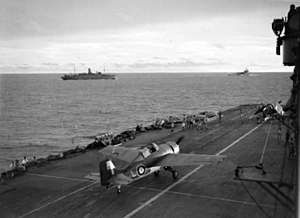 Grumman Martlet lining up the flight deck of HMS Formidable.

The first carrier landing and take-off of a jet aircraft, by a De Havilland Vampire in 1945.

The significance of air power grew between the wars, driven by the increased range, carrying power, and effectiveness of carrier-launched aircraft, until it became impossible to disregard its importance during World War II, following the loss of many warships to aircraft, including the sinking of Prince of Wales and Repulse, the Battle of Taranto, the Attack on Pearl Harbor and numerous other incidents. Following the war, carrier operations continued to increase in size and importance.[2] 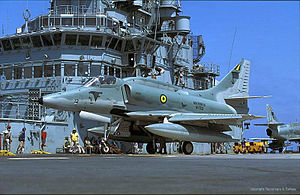 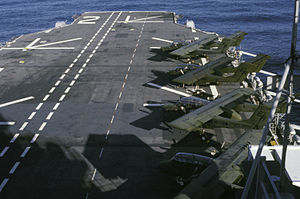 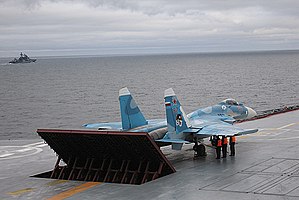 Modern carrier-based aircraft are built in mainly three different versions to suit the needs of its various users. The following terms are those used currently by the U.S. Navy.

CATOBAR is a system used for the launch and recovery of aircraft from the deck of an aircraft carrier. Under this technique, aircraft are launched using a catapult-assisted take-off and landing on the ship using arresting wires. Although this system is more costly than alternative methods, it provides greater flexibility in carrier operations, since it allows the aircraft to operate with higher payloads. Ships with CATOBAR currently include: the U.S. Nimitz class, with the F-18 series,[2] France's Charles de Gaulle with Rafales, and Brazil's São Paulo with A-4 Skyhawks.[3]

The use of catapults allows an aircraft carrier to launch large fixed-wing aircraft. For example, the U.S. Navy launches its E-2 Hawkeye AEW aircraft and C-2A Greyhound cargo aircraft with catapults.

STOVL takeoffs are accomplished with "ski-jumps", instead of a catapult. STOVL use usually allows aircraft to carry a larger payload as compared to during VTOL use, while avoiding the complexity of a catapult. The best known example is the Hawker Siddeley Harrier Jump Jet,[4] despite being capable of VTOL takeoffs, is usually operated as a STOVL aircraft to increase its fuel and weapons load.

STOBAR is a system used for the launch and recovery of aircraft from the deck of an aircraft carrier, combining elements of both STOVL and CATOBAR. Aircraft launch under their own power using a ski-jump to assist take-off (rather than using a catapult). These are conventional aircraft however and require arresting wires to land on the ship. The Russian Navy aircraft carrier Admiral Kuznetsov operated the Su-33, in this manner. Others include the Indian Vikramaditya and the future Vikrant-class aircraft carrier; both will operate MiG-29Ks.[5]

Prior to World War II, the weight of most aircraft allowed them to be launched from aircraft carriers under their own power, but required assistance in stopping. Catapults were installed but were used only when the ship was stationary or adequate wind over the deck could not be arranged by sailing into the wind. Even aircraft as large as the North American B-25 Mitchell were launched in this manner. This was possible because the ship's speed with even the lightest prevailing winds, combined with a low takeoff speed allowed early aircraft to gain flying speed in a very short distance. The most extreme version of this was the battleship platforms used during the 1920s when small, World War I-era biplane fighters such as the Sopwith Camel were launched from only a few dozen feet long mounted atop of a battleship's forward gun turret.

Conventional aircraft, such as the Curtiss P-40 Warhawk, Republic P-47 Thunderbolt, Supermarine Spitfire, and Hawker Hurricane, were often delivered to overseas air bases by aircraft carrier. They would be loaded onto an aircraft carrier in port by cranes, flown off the carrier at sea near their destination under their own power, and land on a friendly airfield ashore. These were not usually combat missions but in some cases the launched aircraft provided air cover for the ship, and the aircraft could not be recovered by the carrier.

Some STOL aircraft, such as the North American Rockwell OV-10 Bronco, have been operated from aircraft carriers and amphibious assault ships in this manner more recently, but this is not common practice.

Even very large aircraft such as the Lockheed C-130 Hercules have been successfully landed and launched from large aircraft carriers, but was done with no cargo and little fuel on board the aircraft. 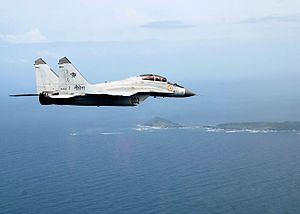 Mikoyan MiG-29K of the Indian Navy