Cammell Laird is a British shipbuilding company. The company came about following the merger of Laird, Son & Co. of Birkenhead and Johnson Cammell & Co. of Sheffield at the turn of the twentieth century. The company also built railway rolling stock until 1929, when that side of the business was separated and became part of the Metropolitan-Cammell Carriage and Wagon Company.

Founding of the business

The Laird company was founded by William Laird, who had established the Birkenhead Iron Works in 1824. When he was joined by his son, John Laird in 1828, their first ship was an iron barge.[1] John realised that the techniques of making boilers could be applied to making ships. The company soon became preeminent in the manufacture of iron ships and also made major advances in propulsion. In 1860, John Laird was joined in the business by his three sons, renaming it John Laird, Sons & Co.[2] The sons continued the business after their father's death in 1874 as Laird Brothers.[2]

Johnson Cammell & Co. was founded by Charles Cammell and Henry and Thomas Johnson: it made, amongst many other metal products, iron wheels and rails for Britain's railways and was based in Sheffield.[3]

The layout of Cammell Laird's docks in 1909

In 1903 the businesses of Messrs. Cammell and Laird merged to create a company at the forefront of shipbuilding.[3] The company also built a number of vehicles for the London Underground. An order was placed for 20 trailer cars and 20 control trailer cars in 1919, which were known as 1920 Stock, and were the first tube cars to be built with doors operated by compressed air. They ran with converted French motor cars, originally built in 1906. The doors were fitted with a sensitive edge, designed to re-open the door if someone became trapped in it, but the mechanism was too sensitive, and was removed after an initial trial period.[4] The cars continued in operation until 1938, eight years after the motor cars were withdrawn, but following withdrawal, five cars became a mobile training school.[5] Cammell Laird also built a number of Standard Stock vehicles for the Underground. They were one of five builders approached to build a sample car to a general specification, which were put into service in February 1923, and three of the builders subsequently built production runs.[6] The company supplied 41 motor cars and 40 trailer cars in 1923, 25 control trailers in 1924, and a further 48 motor cars in 1925.[6]

In 1927, they built 160 passenger coaches for use in India. To transport them, Cammell Laird asked Watsons of Gainsborough to build five dumb barges. The coaches were loaded onto the barges at Clifton, near Nottingham on the River Trent, and towed in pairs downriver by a twin-screwed tug named Motorman, built by Henry Scarr of Hessle in 1925. They were taken to Hull for export.[7] In 1929, the railway rolling stock business of Cammell Laird was spun off and merged to become Metropolitan-Cammell Carriage and Wagon Company Ltd.

Between 1829 and 1947, over 1,100 vessels of all kinds were launched from the Cammell Laird slipways into the River Mersey. Among the many famous ships made by the companies were the world's first steel ship, the Ma Roberts, built in 1858 for Dr. Livingstone's Zambezi expedition, CSS Alabama that was built in 1862 for the Confederate States of America, HMS Caroline that holds the record fastest build time of any significant warship (nine months from her keel being laid till her launch), the first all-welded ship, the Fullagar built in 1920, Cunard's second RMS Mauretania, the aircraft carrier HMS Ark Royal (1937) the battleship HMS Prince of Wales (1941) and the largest vessel to have been built for the Royal Navy up to that time, HMS Ark Royal (1950). 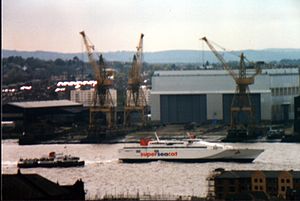 The company was nationalised along with the rest of the British shipbuilding industry as British Shipbuilders in 1977. In 1986, it returned to the private sector as part of Barrow-in-Furness-based Vickers Shipbuilding and Engineering Ltd (VSEL). VSEL and Cammell Laird were the only British shipyards capable of producing nuclear submarines. In 1993, it completed HMS Unicorn (S43) – now HMCS Windsor.[1] After the end of the Upholder-class submarine building programme in 1993, the owners of Cammell Laird, VSEL, announced the yard's closure. This was strongly opposed by the workforce through trade union campaigners including the GMB, led by communist firebrand official Barry Williams,[8] a point noted in his obituary in the Liverpool Daily Post.

Part of the shipyard site was leased by the Coastline Group as a ship repair facility. Coastline eventually bought part of the shipyard and adopted the Cammell Laird name, before floating on the London stock exchange in 1997 and acquiring dockyards at Teesside, Tyneside and Gibraltar.

After experiencing financial difficulties, partly due to the late withdrawal from a £50 million refit contract for the Costa Classica cruise ship by Costa Crociere, the company was forced to enter receivership in April 2001, and the Birkenhead, Teesside and Tyneside shipyards owned by Cammell Laird shiprepair were acquired by the A&P Shiprepair Group in 2001.[9] Cammell Laird Gibraltar, the Royal Dockyard facility in Gibraltar, was disposed of through a local management buyout.

In February 2008 it was announced that the company had won a £28m Ministry of Defence contract to overhaul the Royal Fleet Auxiliary ship RFA Fort Rosalie.[14]

In January 2010 it was announced that Lairds had received a £44m order for the flight decks of the Royal Navy's new aircraft carrier HMS Queen Elizabeth.[15]

In May 2012 it was announced that complete shipbuilding is set to return to the yard with the awarding of preferred bidder status to build two new car ferries for Dunoon based operator Western Ferries.[16] In October 2012 construction began.[17]

In April 2014 the government authorised the procurement by the British Antarctic Survey of a Royal Research Ship at an estimated cost of £200 million. In 2015, Cammell Laird won the construction contract.[18] The vessel is to be named RRS Sir David Attenborough and is expected to be in service in 2019.[19][20]

The shipbuilding hall with RRS Sir David Attenborough under construction

It was announced in October 2017 that Cammell Lairds had struck up a 'teaming agreement' with BAE Systems to bid for Ministry of Defence contracts to build the Royal Navy's Type 31e frigates.[21]