Camelford (Cornish: Reskammel[1]) is a town and civil parish in north Cornwall, England, United Kingdom, situated in the River Camel valley northwest of Bodmin Moor. The town is approximately ten miles (16 km) north of Bodmin[2] and is governed by Camelford Town Council.[3] Lanteglos-by-Camelford is the ecclesiastical parish in which the town is situated (not to be confused with Lanteglos-by-Fowey). The ward population at the 2011 Census was 4,001.[4] The town population at the same census was only 865.[5]

The two main industrial enterprises in the area are the slate quarry at Delabole and the cheese factory at Davidstow and there is a small industrial estate at Highfield.

The A39 road (dubbed 'Atlantic Highway') passes through the town centre: a bypass has been discussed for many years. Camelford Station, some distance from the town, closed in 1966; the site was subsequently used as a cycling museum.

Map of stations on the North Cornwall Railway

Its position near the highest land in Cornwall makes the climate rather wet. On 8 June 1957, 203 millimetres (8.0 in) of rain fell at Camelford. Roughtor is the nearest of the hills of Bodmin Moor to the town and numerous prehistoric remains can be found nearby as well. The Town Hall was built in 1806, but is now used as a branch public library. By the riverside is Enfield Park; hamlets in the parish include Helstone, Tregoodwell, Valley Truckle, Hendra, Lanteglos, Slaughterbridge, Tramagenna, Treforda and Trevia.[6] The economy depends largely on agriculture and tourism. There was a china clay works at Stannon.[7]

Camelford is the home of the North Cornwall Museum and Gallery which contains paintings and objects of local historical interest. To the northwest at Slaughterbridge is an Arthurian Centre and at nearby Camelford Station is the Cycling Museum (temporarily closed since 2010). To the east are the hills of Roughtor and Brown Willy and to the south the old parish churches at Lanteglos and Advent.

The main road through Camelford is the A39 (Atlantic Highway) and there is a thrice-daily bus service from Newquay to Exeter via Launceston that serves the town. A tentatively-planned bypass is on hold; traffic problems continue to crowd the town especially during summer weekends. From 1893 to 1966 the town had a station on the North Cornwall Railway. The nearest national railway station is Bodmin Parkway, 14 miles distant.

Camelford has been linked to the legendary Camelot[8] and the battle of Camlann, but historians have refuted these suggestions. The name comes from the original, Brythonic name of the river (Allen) in combination with cam- = crooked and the English 'ford',[9] though this is not accepted by all.[who?]

Camelford has sometimes been linked to Gafulford the site of a battle against the West Saxons which is more likely to have been at Galford in Devon) Nearby Slaughterbridge has been supposed to be the site of a battle; an error arising because the derivation of "slaughter" in this case from an Anglo-Saxon word for "marsh" was not understood.

Manor of Helston in Trigg

Helstone (or Helston in Trigg) was in the Middle Ages one of the chief manors of the Hundred of Trigg and perhaps in Celtic times the seat of a chieftain. In the Domesday Book this manor was held by Earl Robert of Mortain: there were 2 hides, land for 15 ploughs; the lord had 4 ploughs & 18 serfs; 20 villagers & 18 smallholders had 8 ploughs; 10 acres (40,000 m2) of woodland; 6 square leagues of pasture; five kinds of livestock, in total 195 beasts. The manor of Penmayne was a dependency of this manor.[10] It was one of the 17 Antiqua maneria of the Duchy of Cornwall.

The town elected two members to the Unreformed House of Commons: the first MPs sat in the Parliament of 1552. It was later considered a rotten borough, and in 1832 the Camelford parliamentary constituency was abolished and the town became part of the East Cornwall constituency.

The seal of the borough shows: Arg. a camel passing through a ford of water all proper with legend "Sigillum Vill: de Camelford".[11]

In July 1988, the water supply to the town and the surrounding area was contaminated when 20 tons of aluminium sulphate was poured into the wrong tank at the Lowermoor Water Treatment Works on Bodmin Moor. An independent inquiry into the incident, the worst of its kind in British history, started in 2002, and a draft report was issued in January 2005, but questions remain as to the long-term effects on the health of residents. Michael Meacher, who visited Camelford as environment minister, called the incident and its aftermath, "A most unbelievable scandal."[12] 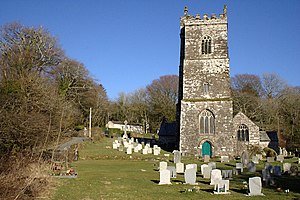 The church of St Thomas of Canterbury

A Cornish cross in the churchyard at Lanteglos; it was found in a blacksmith's shop at Valley Truckle

The parish church of Camelford is at Lanteglos by Camelford though there is also a Church of St Thomas of Canterbury (opened in 1938) in the town.[13] Lanteglos church is dedicated to St Julitta.[14] (At Jetwells near Camelford is a holy well; Jetwells derives from "Julitta's well".) Arthur Langdon (1896) recorded the existence of seven stone crosses in the parish, including three at the rectory[15] (Lanteglos Rectory was converted into a guesthouse in the mid-20th century). There was in medieval times a chapel of St Thomas which probably fell into disuse after the Reformation (it is recorded in 1312). The Rector of Lanteglos is also responsible for the adjacent parish of Advent.

Soul's Harbour Pentecostal Church is situated on the Clease adjacent to the car park. It is affiliated with The Assemblies of God of Great Britain and was founded in 1987. The building the Church occupies was built as the Church School in 1846.

Sir James Smith's School provides secondary education to the town and surrounding area and there is also a primary school.