Beaminster (/ˈbɛmɪnstər/ BEM-in-stər) is a village and civil parish in Dorset, England, situated in the Dorset Council administrative area approximately 15 miles (24 km) northwest of the county town Dorchester. It is sited in a bowl-shaped valley near the source of the small River Brit. The 2013 mid-year estimate of the population of Beaminster parish is 3,100.

Beaminster is the product of the Anglo-Saxon age, dating back to around the 7th century, when it was known as Bebingmynster, meaning the church of Bebbe [1] although the date of origin of the town is unknown. The place name and historic evidence indicates that it was probably the site of a primary Saxon minster church and was at the centre of a large episcopal estate. These are likely to have acted as a focus for a settlement, but evidence of its formation is lacking.[2]

In its history Beaminster has been a centre of manufacture of linen and woollens, the raw materials for which were produced in the surrounding countryside. The town experienced three serious fires in the 17th and 18th centuries; the first of these, during the English Civil War, almost destroyed the fabric of the town.

Beaminster parish church is notable for its architecture, particularly its tower.

In the Domesday Book of 1086 the manor of Beaminster was recorded as being owned by the See of Salisbury. Bishop Osmund gave it as a supplement to two of the Cathedral prebends in 1091.[3]

In the English Civil War the town declared for Parliament and was sacked by Royalist forces in 1644. Prince Maurice stayed in the town on Palm Sunday,[3] though his stay was brief because a fire, caused by a musket being discharged into a thatched roof,[4] almost totally destroyed the town.[3] The town suffered further accidental fires in 1684 and 1781.[5]

Previously Beaminster was a centre for the production of linen and woollens. Flax was grown and sheep kept on the surrounding hills and the town was locally more important than it is today: factories were constructed in the 18th and early 19th centuries, and as many as seventeen inns existed in the town in the early 20th century.[6]

No railway line came through Beaminster and as a result the town declined relative to other local towns such as Bridport and Dorchester.[7]

Horn Park, about 1+1⁄2 miles (2.4 km) northwest of Beaminster, is a neo-Georgian country house of five bays and two storeys, designed by architect T. Lawrence Dale and completed in 1911.[8] Inside the house the central corridor is barrel vaulted and leads to a drawing room whose groin vault is reminiscent of the work of Sir John Soane (1753–1837).[8] The drawing room includes Jacobean features re-used from the largely mid-16th-century nearby Parnham House,[8] which was being altered and restored at about the time that Horn Park was being built.[9] Horn Park is Listed Grade II. Its gardens are occasionally open to the public as part of the National Gardens Scheme. 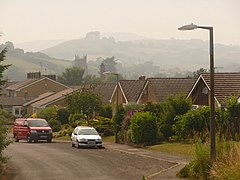 View showing hills to the west of the town

Beaminster is sited 50 to 80 metres (160–260 ft) above sea level in a bowl-shaped valley, surrounded by hills which rise to 244 metres (801 ft) at Beaminster Down to the northeast. The River Brit and many small streams emerge from springs on the slopes above the town.[10] The confluences of several of these streams are within the town's boundaries. Beaminster's growth has historically been along the course of these streams, resulting in a settlement pattern that is roughly star-shaped.[11]

Beaminster is sited mostly on Middle Jurassic fuller's earth clay, with some Inferior Oolite in the south of the town and Bridport Sand Formation north of the town centre. The hills north and east of the town are Cretaceous chalk with a scarp face of Upper Greensand Formation, while those to the south and west are of Bridport Sand Formation. There are several faults running west-northwest to east-southeast through the town and its southern environs.[11] Horn Park Quarry SSSI[12][13] produced building stone from the Inferior Oolite and some quality fossil specimens[14] before becoming a light industrial estate on the road to Broadwindsor. Apart from the ammonites, the site displays a remarkable flat erosion surface and the most complete succession in the Upper Aalenian ironshot oolite limestone of the area.

Dorset County Council's 2013 mid-year estimate of the population of Beaminster parish is 3,100.[15]

The historic population of Beaminster parish from the censuses between 1921 and 2001 is shown in the table below.

Published results from the 2011 national census combine information on Beaminster parish with the small neighbouring parish of Mapperton to the southeast. Within this area there were 1,680 dwellings,[17] 1,529 households[18] and a population of 3,136.[19]

DuPont produce Nisaplin (E234), a commercial formulation of the natural bacteriocin nisin, at a factory in the town.[20] It was first isolated by Aplin and Barret and produced in the 1950s in the factory laboratory then at 11–15 North Street.[citation needed] The Clipper tea company is based in Beaminster. It is currently owned by the Dutch company Royal Wessanen.[21][22]

Buckham Fair, a fundraising vintage fair held annually on land near the town, took place for ten years until the last event in 2018.[25] As of 2020, the fair has been indefinitely postponed.[26]

The nearest railway station is 5 miles (8 km) north of the town at Crewkerne. Exeter International Airport is 30 miles (48 km) to the west. The main road through the town is the A3066, which leads to Bridport to the south and Mosterton and Crewkerne to the north. The road north passes through Horn Hill tunnel, which opened in June 1832[27] and is the sole pre-railway age road tunnel that is still in daily public use.[28]

Primary schools in the town include St Mary's Church of England Primary School.

Beaminster School is the town's secondary school. It has a combined sixth form with The Sir John Colfox Academy, in the nearby town of Bridport.

Beaminster is also home to Mountjoy School[29] co-sharing the site of Beaminster School.

Hooke Park is the woodland campus of the Architectural Association School of Architecture.[30] 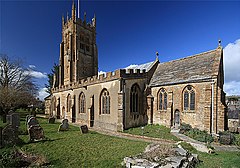 Beaminster has an Anglican church, St Mary's, and a Catholic church, St John's.[31] St Mary's is notable for its architecture, which is considered among the best in the county.[3] The tower in particular has been described as "a handsome example of its period" and "the glory of Beaminster".[6][32] St Mary's construction mostly dates from the 15th and 16th centuries, but was restored twice in the 19th. The eastern part of the north aisle incorporates part of an earlier 13th-century building, and the font bowl is late 12th-century.[32] The pulpit is Jacobean.[3] A chapel of ease, Holy Trinity Church, was built in 1849-51.[33] After becoming redundant in 1978, it was converted into a private residence, Trefoil House.[34][35]

Beaminster is referenced as "Emminster" in the fictional Wessex of Thomas Hardy's Tess of the d'Urbervilles.[36]

It is a location for part of the story for the post-apocalyptic novel The Day of the Triffids by John Wyndham.[37]

See also: List of twin towns and sister cities in the United Kingdom

Beaminster is twinned with: