B, or b, is the second letter of the Latin-script alphabet. Its name in English is bee (pronounced /ˈbiː/), plural bees.[1][2] It represents the voiced bilabial stop in many languages, including English. In some other languages, it is used to represent other bilabial consonants.

Old English was originally written in runes, whose equivalent letter was beorc ⟨ᛒ⟩, meaning "birch". Beorc dates to at least the 2nd-century Elder Futhark, which is now thought to have derived from the Old Italic alphabets' ⟨ 𐌁 ⟩ either directly or via Latin ⟨

⟩. These Old English Latin alphabets supplanted the earlier runes, whose use was fully banned under King Canute in the early 11th century. The Norman Conquest popularised the Carolingian half-uncial forms which latter developed into blackletter ⟨

⟩. Around 1300, letter case was increasingly distinguished, with upper- and lower-case B taking separate meanings. Following the advent of printing in the 15th century, Holy Roman Empire (Germany) and Scandinavia continued to use forms of blackletter (particularly Fraktur), while England eventually adopted the humanist and antiqua scripts developed in Renaissance Italy from a combination of Roman inscriptions and Carolingian texts. The present forms of the English cursive B were developed by the 17th century. 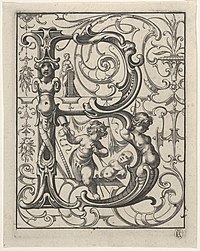 Late Renaissance or early Baroque design of a B, from 1627

The Roman ⟨B⟩ derived from the Greek capital beta ⟨Β⟩ via its Etruscan and Cumaean variants. The Greek letter was an adaptation of the Phoenician letter bēt ⟨𐤁⟩.[3] The Egyptian hieroglyph for the consonant /b/ had been an image of a foot and calf ⟨

⟩,[4] but bēt (Phoenician for "house") was a modified form of a Proto-Sinaitic glyph ⟨

⟩ meaning "house".[5][6] The Hebrew letter beth ⟨ב⟩ is a separate development of the Phoenician letter.[3]

By Byzantine times, the Greek letter ⟨Β⟩ came to be pronounced /v/,[3] so that it is known in modern Greek as víta (still written βήτα). The Cyrillic letter ve ⟨В⟩ represents the same sound, so a modified form known as be ⟨Б⟩ was developed to represent the Slavic languages' /b/.[3] (Modern Greek continues to lack a letter for the voiced bilabial plosive and transliterates such sounds from other languages using the digraph/consonant cluster ⟨μπ⟩, mp.)

In English, ⟨b⟩ denotes the voiced bilabial stop /b/, as in bib. In English, it is sometimes silent. This occurs particularly in words ending in ⟨mb⟩, such as lamb and bomb, some of which originally had a /b/ sound, while some had the letter ⟨b⟩ added by analogy (see Phonological history of English consonant clusters). The ⟨b⟩ in debt, doubt, subtle, and related words was added in the 16th century as an etymological spelling, intended to make the words more like their Latin originals (debitum, dubito, subtilis).

As /b/ is one of the sounds subject to Grimm's Law, words which have ⟨b⟩ in English and other Germanic languages may find their cognates in other Indo-European languages appearing with ⟨bh⟩, ⟨p⟩, ⟨f⟩ or ⟨φ⟩ instead.[3] For example, compare the various cognates of the word brother. It is the seventh least frequently used letter in the English language (after V, K, J, X, Q, and Z), with a frequency of about 1.5% in words.

Many other languages besides English use ⟨b⟩ to represent a voiced bilabial stop.

In Estonian, Danish, Faroese, Icelandic, Scottish Gaelic and Mandarin Chinese Pinyin, ⟨b⟩ does not denote a voiced consonant. Instead, it represents a voiceless /p/ that contrasts with either a geminated /p:/ (in Estonian) or an aspirated /ph/ (in Danish, Faroese, Icelandic, Scottish Gaelic and Pinyin) represented by ⟨p⟩. In Fijian ⟨b⟩ represents a prenasalised /mb/, whereas in Zulu and Xhosa it represents an implosive /ɓ/, in contrast to the digraph ⟨bh⟩ which represents /b/. Finnish uses ⟨b⟩ only in loanwords.

In the International Phonetic Alphabet, [b] is used to represent the voiced bilabial stop phone. In phonological transcription systems for specific languages, /b/ may be used to represent a lenis phoneme, not necessarily voiced, that contrasts with fortis /p/ (which may have greater aspiration, tenseness or duration).

B is also a musical note. In English-speaking countries, it represents Si, the 12th note of a chromatic scale built on C. In Central Europe and Scandinavia, "B" is used to denote B-flat and the 12th note of the chromatic scale is denoted "H". Archaic forms of 'b', the b quadratum (square b, ♮) and b rotundum (round b, ♭) are used in musical notation as the symbols for natural and flat, respectively.

In Contracted (grade 2) English braille, 'b' stands for "but" when in isolation.

In computer science, B is the symbol for byte, a unit of information storage.

In engineering, B is the symbol for bel, a unit of level.

In chemistry, B is the symbol for boron, a chemical element.