The Auxiliary Division of the Royal Irish Constabulary (ADRIC), generally known as the Auxiliaries or Auxies, was a paramilitary unit of the Royal Irish Constabulary (RIC) during the Irish War of Independence. It was founded in July 1920 by Major-General Henry Hugh Tudor and made up of former British Army officers, most of whom came from Great Britain and had fought in the First World War. Almost 2,300 served in the unit during the conflict. Its role was to conduct counter-insurgency operations against the Irish Republican Army (IRA), acting mainly as a mobile striking and raiding force. It operated semi-independently of the RIC and was mainly deployed to southern and western regions where fighting was heaviest.

The Auxiliaries became infamous for reprisal attacks on civilians and civilian property in revenge for IRA actions, including extrajudicial killings and arson; most notably the burning of Cork city in December 1920.

The Auxiliaries were distinct from the so-called Black and Tans. These were also former British soldiers who were recruited into the RIC, but served as regular constables. Both groups wore a mixed uniform of British Army khaki and RIC dark green, although the Auxiliaries had their own insignia and typically wore Balmoral caps. The Auxiliaries and the RIC as a whole were disbanded in early 1922, following the Anglo-Irish Treaty.

In September 1919, the Commander-in-Chief, Ireland, Sir Frederick Shaw suggested that the police force in Ireland be expanded via the recruitment of a special force of volunteer British ex-servicemen.[2] During a Cabinet meeting on 11 May 1920, the Secretary of State for War, Winston Churchill, suggested the formation of a "Special Emergency Gendarmerie, which would become a branch of the Royal Irish Constabulary".[3] Churchill's proposal was referred to a committee chaired by General Sir Nevil Macready, Commander-in-Chief of the British forces in Ireland. Macready's committee rejected Churchill's proposal, but it was revived two months later, in July, by the Police Adviser to the Dublin Castle administration in Ireland, Major-General H H Tudor.[4] In a memo dated 6 July 1920, Tudor justified the scheme on the grounds that it would take too long to reinforce the Royal Irish Constabulary (RIC) with ordinary recruits. Tudor's new "Auxiliary Force" would be strictly temporary: its members would enlist for a year: their pay would be £7 per week (twice what a constable was paid), plus a sergeant's allowances, and would be known as "Temporary Cadets". At this time a London advertisement for ex-officers to manage coffee stalls at two pounds ten shillings a week received five thousand applicants.[5]

The ADRIC was recruited in Great Britain from among ex-officers who had served in World War I, especially those who had served in the British Army (including the Royal Flying Corps). Most recruits were from Britain, although some were from Ireland, and others came from other parts of the British Empire. Many had been highly decorated in the war and three, James Leach, James Johnson, and George Onions, had been awarded the Victoria Cross.[6] Their decorations make it clear that many had been promoted from the ranks: some men, for example, had been awarded the common soldier's Military Medal instead of (or in addition to) the officer's Military Cross. Enlisted men who had been commissioned as officers during the war often found it difficult to adjust to their loss of status and pay in civilian life, and some historians have concluded that the Auxiliary Division recruited large numbers of these "temporary gentlemen".[7] 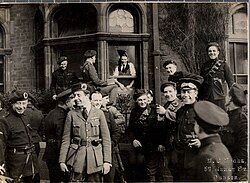 A group of Auxiliaries and "Black and Tans" in Dublin, April 1921

Recruiting began in July 1920, and by November 1921, the division was 1,900 strong. The Auxiliaries were nominally part of the RIC, but actually operated more or less independently in rural areas. Divided into companies (eventually fifteen of them), each about one hundred strong, heavily armed and highly mobile, they operated in ten counties, mostly in the south and west, where Irish Republican Army (IRA) activity was greatest. They wore either RIC uniforms or their old army uniforms with appropriate police badges, along with distinctive Tam o' Shanter caps. They were commanded by Brigadier-General F P Crozier.[8]

The elite ex-officer division proved to be much more effective than the Black and Tans especially in the key area of gathering intelligence.[9] Auxiliary companies were intended as mobile striking and raiding forces, and they scored some notable successes against the IRA. On 20 November, the night before Bloody Sunday, they captured Dick McKee and Peadar Clancy, the commandant and vice-commandant of the IRA's Dublin Brigade, and murdered them in Dublin Castle. That same night, they caught William Pilkington, commandant of the Sligo IRA, in a separate raid. A month later, in December, they caught Ernie O'Malley completely by surprise in County Kilkenny: the IRA officer was reading in his room when a Temporary Cadet opened the door and walked in; "He was as unexpected as death," said O'Malley.[10] In his memoirs, the commandant of the Clare IRA, Michael Brennan, describes how the Auxiliaries nearly captured him three nights in a row.

IRA commanders became concerned about the morale of their units as to many Volunteers the Auxiliaries seemed to be 'super fighters and all but invincible'.[11] Those victories which were won over the Auxiliaries are among the most celebrated in the Irish War of Independence. On 28 November 1920, for example, a platoon of Auxiliaries was ambushed and wiped out in the Kilmichael Ambush by Tom Barry and the West Cork IRA. A little more than two months later, on 2 February 1921, another platoon of Auxiliaries was ambushed by Seán MacEoin and the Longford IRA in the Clonfin Ambush. On 19 March 1921 the 3rd Cork Brigade of the IRA defeated a large scale attempt by the British Army & Auxiliary Division to encircle and trap them at the Crossbarry Ambush. Later still, on 15 April 1921, an officer named Mackinnon, commanding officer of H Company ADRIC, was assassinated by the Kerry IRA.[12]

Successes required reliable intelligence and raids often brought no result—or sometimes worse. In one case, they arrested a Castle official, Law Adviser W E Wylie, by mistake. In another, more notorious case, on 19 April 1921 they raided the Shannon Hotel in Castleconnell, County Limerick on a tip that there were suspicious characters drinking therein. The "suspicious characters" turned out to be three off-duty members of the RIC: both sides mistook the other for insurgents and opened fire; three people, an RIC man, an Auxiliary Cadet[13] and a civilian, were killed in the shootout that followed. 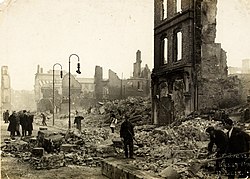 The aftermath of the Burning of Cork by Auxiliaries, December 1920

Many of the Division's Temporary Cadets did not cope well with the frustrations of counterinsurgency: hurriedly recruited, poorly trained, and with an ill-defined role, they soon gained a reputation for drunkenness, lack of discipline, and brutality worse than that of the Black and Tans. They were disliked by members of the Royal Irish Constabulary, who considered them "rough." They seem to have been unpopular with the British Army as well. One British officer, who served as adjutant for the 2nd Battalion, Cameron Highlanders, wrote in his memoirs that the Auxiliaries "were totally undisciplined by our regimental standards".[14] Macready wrote in his own memoirs that "those companies that had the good fortune to have good commanders, generally ex-Regular officers, who could control their men, performed useful work, but the exploits of certain other companies under weak or inefficient commanders went a long way to discredit the whole force".[15]

Like the ordinary police, the Auxiliaries sometimes took reprisals in the wake of attacks by the IRA. On the evening of Bloody Sunday, for example, Dick McKee and Peadar Clancy were killed by their Auxiliary captors under very suspicious circumstances: the official explanation, that the two insurgents tried to escape, is widely disbelieved. But perhaps the most notorious reprisal involving the Auxiliary Division was the burning of Cork on 11 December 1920.[16] At 7:30 p.m. that evening, a truckload of Auxiliaries from newly formed K Company was ambushed at Dillons Cross: a grenade was thrown onto their truck, wounding ten Auxiliaries and killing one, Temporary Cadet Spencer Chapman. Later that night, police and Auxiliaries took revenge by setting fire to the city's commercial centre, preventing the fire service from attending the blaze, and shooting seven people.

Two IRA men, Cornelius and Jerimiah Delaney, were killed in their beds at home in Dublin Hill (though Con Delaney survived to December 18). Five civilians were shot on the streets. Damage amounting to $20 million was inflicted. The Cork Fire Brigade did not have the resources to deal with the fires: law and order, it seemed, had completely broken down. The British Government at first claimed the citizens were responsible for the arson, but a military court of inquiry known as the Strickland Report later found that the fires had been started by the Auxiliaries. Its findings were suppressed by the government, but K Company was disbanded. Allegedly, some Auxiliaries took to wearing pieces of burnt cork on their caps afterwards, to celebrate the occasion.

A few days later, near Dunmanway, an Auxiliary called Vernon Hart killed a young man and a seventy-year-old priest, whom the Auxiliary patrol met on the road. A third civilian, a local magistrate, escaped by approaching the other Auxiliaries before fleeing across nearby fields. Hart was arrested and court-martialled. At his trial, it was revealed that he had been a "particular friend" of TC Chapman, and had been drinking heavily since 11 December.[17] Concerned that parallels would be made between this case and the killing of Francis Sheehy-Skeffington, the British Cabinet directed that Hart should be examined by at least two medical experts, a highly unusual intervention. These medical witnesses testified that Hart was insane at the time of the murders and the court-martial concluded that he "was guilty of the offenses with which he was charged, but was insane at the time of their commission".[18] Although Hamar Greenwood announced to the House of Commons that he would be detained at His Majesty's pleasure, Hart was briefly held at Broadmoor Criminal Lunatic Asylum before release the following year.[18]

While Hart spent some time in a Criminal Lunatic Asylum, other Auxiliaries got away with murder. On 9 February 1921, James Murphy and Patrick Kennedy were arrested by Auxiliaries in Dublin. Two hours later, constables of the Dublin Metropolitan Police found the two men lying shot in Drumcondra: Kennedy was dead, and Murphy was dying. Murphy died in the Mater Hospital, Dublin on 11 February, but before the end, he declared that he and Kennedy had been shot by their Auxiliary captors. A military court of inquiry was held, and Captain W L King, commanding officer of F Company ADRIC, was arrested for the killings. King was court-martialled on 13–15 February, but acquitted, after Murphy's dying declaration was ruled inadmissible, and two officers from F Company provided perjured alibis for Captain King at the time of the shootings. Just short of two weeks later at the Clonmult Ambush in county Cork, an Auxiliary company were accused of killing seven IRA men after they had surrendered.[19]

But while the authorities often turned a blind eye to reprisals, they were less tolerant of crimes against "civilians" - loyal and non-political people. A number of Auxiliaries were dismissed and prosecuted for theft, including a one-armed former Temporary Cadet, Major Ewen Cameron Bruce, who was imprisoned for robbing a creamery, after being dismissed from the Division for striking a civilian without cause. On 19 February 1921, Commandant Crozier resigned after a dispute over discipline with the Police Adviser. Crozier had dismissed 21 Temporary Cadets accused of looting a licensed grocery store belonging to Protestants in County Meath. When General Tudor reinstated these men pending an official inquiry, Crozier left the Force. He was replaced by his assistant, Brigadier-General E.A. Wood, who commanded the Division until it was demobilized.

The Auxiliary Division was disbanded along with the RIC in 1922. Although the 1921 Anglo Irish Treaty required the Irish Free State to assume responsibility for the pensions of RIC members, the Auxiliaries were explicitly excluded from this provision.[20]

Auxiliaries have featured in historical drama films like Michael Collins, The Last September, and The Wind That Shakes the Barley.