The Aster missile series, primarily comprising the Aster 15 and Aster 30 are a family of vertically launched surface-to-air missiles.[2] The name "Aster" originates from the mythical Greek archer named Asterion (in Greek mythology), Asterion likewise receiving his name from the ancient Greek word aster (Greek: ἀστήρ), meaning "star". Aster is manufactured by Eurosam, a European consortium consisting of MBDA France, MBDA Italy (combined 66%) and the Thales Group (33%). The missile is designed to intercept and destroy a wide range of air threats, such as supersonic anti-ship cruise missiles at very low altitude (Sea-skimming)[5] and fast flying, high performance aircraft or missiles.

Aster is primarily operated by France, Italy, and the United Kingdom and is an integrated component of the PAAMS air-defence missile system, known in the Royal Navy as Sea Viper. As the principal weapon of the PAAMS system, Aster equips the Type 45 destroyers and the Horizon class frigates. Aster also equips the French and Italian FREMM multipurpose frigates, though they will not be operating as part of a PAAMS air-defence suite itself but through Franco-Italian specific declinations of this suite.

During the 1980s, the predominant missiles in Franco-Italian service were short-range systems such as the French Crotale, Italian Aspide or American Sea Sparrow, with ranges up to a dozen kilometres. Some vessels were also equipped with the American medium/long range Standard. France and Italy decided to start development of a domestic medium/long range surface-to-air missile to enter service in the first decade of this millennium, that would give them comparable range but superior interception capability to the American Standard or British Sea Dart already in service. Thought was given in particular to the new missile's ability to intercept next-generation supersonic anti-ship missiles, such as the Brahmos missile developed jointly by India and Russia. This allowed the actual systems to have the characteristic of being specialised either in short-to-medium range "point defence" (ships, for instance), or in medium-to-long range "zone defence" (fleets).

In May 1989, a Memorandum of understanding was signed between France and Italy for the development of a family of future surface-to air-missiles. Eurosam was formed shortly afterwards. By July 1995 development had taken shape in the form of the Aster missile and test firing of the first Aster 30 took place. The missile successfully intercepted a target at an altitude of 15,000 m and at speeds of 1000 km/h. A Phase 2 contract was awarded in 1997 at US$1 billion for pre-production and development of the French-Italian land and naval systems.

During development trials between 1993 and 1994 all flight sequences, altitudes and ranges, were validated. This was also the period during which the launch sequence of Aster 30 was validated. In May 1996, trials of the Aster 15 active electromagnetical final guidance system against live targets began. All six attempts were successful. Again during 1997 Aster was extensively tested, this time being pitted against targets such as the C22 target and first generation Exocet anti-ship missiles. In numerous engagements Aster scored direct impacts on its targets. During one such engagement on 13 November 1997 in a strong countermeasures environment, the Aster was not armed with its military warhead so that the distance between the Aster and the target could be recorded. The target (a C22) was recovered bearing two strong cuts due to the fins of the Aster missile.

In May 2001 Aster had again successfully completed the "manufacturer's validation firing test" and was deployed for the first time on the French nuclear-powered aircraft carriers Charles de Gaulle (R91). Again on the 29 June 2001 achieved a successful interception of a Arabel missile at low altitude in less than five seconds. During the same year a target simulating an aircraft flying at speeds of Mach 1 and at an altitude of 100 meters was intercepted by an Aster 15. The first ever operational firing of the Aster missile took place during October 2002 on board Charles de Gaulle. Finally in November 2003 Eurosam was awarded the 3 billion euro Phase 3 production contract which saw full production commence and exports to France, Italy, Saudi Arabia and the United Kingdom.[6] The resulting Aster surface-to-air missile meets inter-service and international requirements, addressing the needs of the land, air and naval forces of France, Italy and the United Kingdom. The decision to base the missile around a common terminal intercept 'dart' to which different sized boosters can be attached has made it modular and extensible.

There are currently two versions of the Aster missile family, the short-medium range version, Aster 15, and the long range version, Aster 30. The missile bodies are identical; Their difference in range and intercept speed is because Aster 30 uses a much larger booster. Total weights of the Aster 15 and Aster 30 are 310 kg and 450 kg respectively. Aster 15 has a length of 4.2 meters, rising to just under 5 meters for Aster 30. Aster 15 has a diameter of 180mm.[1] Given the larger dimensions of the Aster 30, a naval based system requires the longer tubes of the Sylver A50 or A70 vertical launching system (VLS). Additionally the American Mark 41 Vertical Launching System can accommodate Aster 30.

Block 1 is used in the Eurosam SAMP/T system operated by the French Air Force and the Italian Army.[10] As of 2014[update], the development of Block 1NT is being funded by France and Italy.[9] In 2016, the United Kingdom showed interest in acquiring the Block 1NT version for its Type 45 Destroyers.[11] 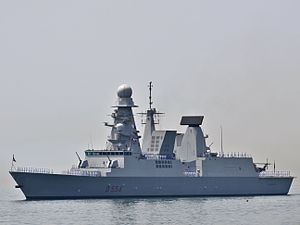 The "radar module" of the SAMP/T Ground-based area defence system.

Aster 30 has been successfully incorporated into a land based SAM system, fulfilling the "Ground-based area defence" mission requirement. It comes in the form of the Eurosam SAMP/T (Surface-to-Air Missile Platform/Terrain). The system uses a network of sophisticated radars and sensors - including 3D phased array radar - enabling it to be highly effective against all types of air threats. SAMP/T uses an upgraded version of the Arabel long range radar, with improved performance developed under the Aster 30 block 1 upgrade program, in order to extend the system's capability against higher speed targets and higher altitude targets. The system can intercept missiles with a 600 km range (short range ballistic missile targets).[12]

Map with Aster operators in blue