Apollonia (Ancient Greek: Απολλωνία), known in the Kingdom of Jerusalem as Arsuf (Arabic: أرْسُوف‎, romanized: Arsūf; Latin: Arsur), was an ancient city in Hellenistic and Roman Judea, in the Byzantine period renamed to Sozusa (Σώζουσα, or Sozusa in Palaestina to differentiate it from Sozusa in Libya).[1] It was situated on a cliff above the Mediterranean Sea, about 34 kilometres (21 mi) south of Caesarea.

It fell to the Muslim conquest in 640 and was fortified against Byzantine attacks and became known as Arsuf (Arabic: أرْسُوف‎ ʾArsūf, Latinized Arsur). In 1101 it was conquered by the Crusader Kingdom of Jerusalem, and was a strategically important stronghold in the Third Crusade, during which the Battle of Arsuf (1191) was fought nearby. The fortified city and the castle fell to the Mamluks in 1265, when both were completely destroyed.

The site of Arsuf (Tel Arshaf; תֵּל אַרְשָׁף, also Apollonia–Arsuf אַפּוֹלוֹנְיָה-אַרְסוּף) is now in Herzliya municipality, Israel (just north of Tel Aviv). The site was intensively excavated from 1994. In 2002 Apollonia National Park was opened to the public.

The city is first recorded under its Greek name Apollonia in the final decades of the Persian period (mid-4th century BC). In a long-standing suggestion, first proposed by Clermont-Ganneau in 1876, it was assumed that the Greek name was given due to the interpretatio graeca of the Canaanite deity Resheph (ršp) with Apollo (as god of the plague), suggesting that the settlement would originally have been a "Phoenician" (Canaanite) foundation. The Semitic name ršp would then have been "restored" in the medieval Arabic toponym of Arsūf. While there is no archaeological evidence for a settlement prior to the Persian period, Izre’el (1999) upholds this identification, suggesting that the Semitic name might have been preserved by the Aramaic-speaking Samaritan community. The Samaritan chronicle of Abu l-Fath (14th century, written in Arabic) records a toponym rʿšfyn (with ayin). Izre’el (1999) considers the possibility of identifying this toponym with the Arabic Arsūf, assuming that the ayin may derive from a mater lectionis used in Samaritan Aramaic orthography.[2]

A tradition connecting the name with the biblical Resheph, a grandson of Ephraim, is spurious.[3]

The name of the nearby Israeli settlement of Rishpon was given in 1936, inspired by a misreading of an inscription of Tiglath-Pileser III, where *rašpūna was read for kašpūna; recognition of the misreading rendered void the identification of Arsuf with a supposed Iron Age Phoenician settlement of *Rašpūna.[4]

The renaming of Apollonia "city of Apollo" to Sozusa (Σώζουσα Sōzousa) "city of the Saviour" took place in the late Roman (early Byzantine) period, under the influence of Christianity as the state religion, motivated by Soter (Σωτήρ) "savior" being a byname of Apollo as well as of Christ. The renaming is paralleled in at least three other cities called Apollonia: Sozusa in Cyrenaica, Sozopolis in Pisidia and Sozopolis in Thrace.[1] The site is variously referred to as Apollonia, Arsin, Arsuf, Arsuph, Arsur, Arsuth, Assur, Orsuf and Sozusa in Crusader-era documents.[5]

The identification of ancient Apollonia with Byzantine-era Sozusa is due to Stark (1852),[6] that of medieval Arsuf with Apollonia/Sozusa to Clermont-Ganneau (1876).[1]

Remains of the castle 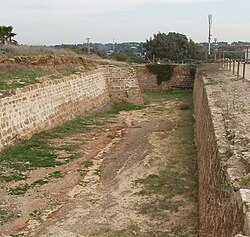 The dry moat of the castle

Although some Chalcolithic and Iron Age remains were uncovered at the site, there is no evidence that there was a settlement prior to the Persian period (ca. 500 BC). While the importance of the town was overshadowed by both Jaffa and Caesarea, Apollonia developed into a regional center after the decline of its neighbouring site at Tel Michal in the Late Persian period, and was likely the main city and harbour in the southern Sharon Plain by the mid-4th century BC,. It is mentioned in the Periplus of Pseudo-Scylax.[7]

During the Hellenistic period it was a port town ruled by the Seleucids.

Under Roman rule, the town prospered and grew into the chief commercial and industrial centre of the region between the Poleg and Yarkon rivers. In AD 113, Apollonia was destroyed partially by an earthquake, but recovered quickly.[citation needed]

Apollonia is mentioned by Pliny, Hist. nat., V, 14, and Ptolemy, V, xv, 2, between Cæsarea and Joppa, and by other ancient authors, including Josephus, Ant. jud., XIII, xv, 4, Appianus, Hist. rom. Syr., 57. The Roman proconsul, Gabinius, found it ruined in 57 BC, and had it rebuilt (Josephus, Bel. jud., I, viii, 4). Apollonia is depicted in the Tabula Peutingeriana, on the coastal highway between Joppa and Caesarea, at the distance of 22 miles from Caesarea, confirming the identification of Arsuf with Apollonia.

There was no coin minting in Apollonia, confirming that the town did not have the role of a Roman provincial center but was rather considered a medium-sized coastal town like Jamnia and Azotus.

Sozusa in Palaestina was the name of the city in the late Roman province of Palaestina Prima,[dubious – discuss] and its episcopal see was a suffragan of Caesarea, the provincial capital. The name had changed from Apollonia to Sozusa before 449, when Bishop Baruchius signed the acts of the Robber Council of Ephesus with this title. [8] The name Sozusa also occurs in the works of the Byzantine geographers Hierocles and George of Cyprus. Apart from Baruchius of 449, the names of two more of its bishops, Leontius in 518, and Damianus in 553, are also known.[9] The death of patriarch Modestus in 630 in the city is recorded in both Georgian and Arabic texts, the Georgian texts using Sozos (for Sozusa) and the Arabic texts Arsuf, suggesting that both names remained in use for some time in the early medieval period.[10]

During the Byzantine–Sasanian War of 602–628, the city surrendered on terms in 614 to Shahrbaraz and was in Sasanian hands until near the end of the war.[11]

In 640, the town fell to the Muslim conquest. The Arabic name Arsuf or Ursuf occurs in works of Arab geographers from the 10th century, e.g. Al-Muqaddasi said it was "smaller than Yafah, but strongly fortified and populous There is here a beautiful pulpit, made in the first instance for the Mosque of Ar Ramlah, but which being found too small, was given to Arsuf".[12]

In the Middle Ages, Sozusa was confused with Antipatris. The identity of medieval Arsuf with ancient Apollonia was first noted by Clermont-Ganneau in 1876.[1]

The town's area decreased to about 22 acres (89,000 m2) and, for the first time, it was surrounded by a fortified wall with buttresses, to resist the constant attacks of Byzantine fleets from the sea.[citation needed]

At the time of the Muslim conquest, Sozusa was inhabited by Samaritans.[13] In 809, following the death of Harun al-Rashid, the local Samaritan community was destroyed and their synagogue ruined.[citation needed]

Godfrey de Bouillon attempted to capture it, but failed for want of ships (William of Tyre, IX, x). King Baldwin I took it in 1102, after a siege by land and sea, allowing the inhabitants to withdraw to Ascalon. The Crusaders, who called it Arsur, rebuilt the city's walls and created the Lordship of Arsur in the Kingdom of Jerusalem. In 1187 Arsuf was recaptured by the Muslims, but fell again to the Crusaders on 7 September 1191 after the Battle of Arsuf, fought between the forces of Richard I of England and Saladin.

John of Ibelin, Lord of Beirut became Lord of Arsuf in 1207 when he married Melisende of Arsuf. Their son John of Arsuf (d. 1258) inherited the title. The title then passed to John of Arsuf's eldest son Balian of Arsuf (d. 1277). He built new walls, the large castle and new harbor in 1241. In 1251 Louis IX of France re-erected its ramparts. From 1261, the city was ruled by the Knights Hospitaller.[citation needed]

In 1265, sultan Baibars, ruler of the Mamluks, captured Arsuf, after 40 days of siege.[14] The inhabitants were killed or sold as slaves and the town completely razed. The destruction was so complete that the site was abandoned and never regained its urban character - in the 14th century the geographer Abulfeda said it contained no inhabitants ("Tabula Syriæ", 82).

According to Mujir al-Din (writing c. 1496), the Sidna Ali Mosque just south of Arsuf was dedicated by Baibars at the site of a saint's tomb where he prayed for victory prior to retaking Arsuf.[15]

In 1596, Ottoman tax registers recorded a village there with 22 families and 4 bachelors, all Muslims. The villagers paid a total of 2,900 akçe in taxes. 1/3 the revenue went to a waqf: Hadrat 'Ali bin 'Ulaym.[16] It appeared, just named "village" on the map that Pierre Jacotin compiled during Napoleon's invasion of 1799.[17]

Sozusa in Palaestina is listed as a titular see in the Annuario Pontificio.[18] Due to the confusion regarding the location of the ancient city, it was also assigned under the name Antipatris. Its last titular bishop of the Latin Church was Francis Joseph McSorley, the Apostolic Vicar of Jolo (d. 1970). It has no longer been assigned since, in accordance with the practice established after the Second Vatican Council regarding all titular sees situated in what were the eastern patriarchates.[19]

The site was incorporated in Herzeliya municipality in 1924. At the time, a village called al-Haram existed adjacent to the ruins, but it was depopulated during the 1948 Arab-Israeli War, and the area south of the site was built up as the Shikun Olim (שיכון עולים "immigrant housing") district of Herzeliya in the 1950s.

Rishpon was established in 1936 to the immediate north-east of the site. It is part of the Hof HaSharon Regional Council, Central District.

Arsuf is a modern "exclusive clifftop community" named for Arsuf, built in 1995 north of the site, in Hof HaSharon Regional Council.[20]

The site of Apollonia–Arsuf was excavated in the 1990s and opened for visitors as Apollonia National Park in 2002. Excavations were ongoing as of 2015. The excavation report is prepared in three volumes, of which the first was published in 1999. The second and third volume, covering the excavation seasons until 2015, were in preparation as of 2016. The remains above ground before the excavations included the medieval city wall and moat, enclosing an area of about 90 dunam, a Crusader castle with a double-wall system with an area of about 4 dunam, a port with built jetties and a sheltered anchorage, protected by a sandstone reef. Large amounts of pottery were recovered in the area surrounding the city, mostly of the Byzantine and early Islamic period, indicating that the city extended significantly beyond its old walls in the 7th century. A large Roman-era villa maritima was uncovered to the south of the site.