USS Yorktown circa the early 1960s 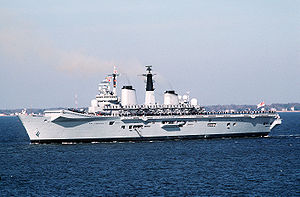 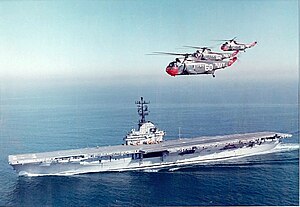 An S-2E ready for launching from USS Bennington

An anti-submarine warfare carrier (ASW carrier) (US hull classification symbol CVS) is a type of small aircraft carrier whose primary role is as the nucleus of an anti-submarine warfare hunter-killer group. This type of ship came into existence during the Cold War as a development of the escort carriers used in the ASW role in the North Atlantic during World War II.

After World War II, the main naval threat to most Western nations was confrontation with the Soviet Union. The Soviets ended the war with a small navy and took the route of asymmetric confrontation against Western surface ship superiority by investing heavily in submarines both for attack and later fielding submarine-launched missiles.[1][2] Several nations who purchased British and US surplus light carriers were most easily able to accommodate slow-moving, less expensive, and easy-to-land anti-submarine aircraft from the 1960s forward, such as the S-2 Tracker, which flew from the decks of US, Canadian, Australian, Dutch, Argentine, and Brazilian carriers, or Alizé, which flew from French and Indian ships, allowing these ships to still remain useful especially in the framework of NATO even as newer fighter and strike aircraft were becoming too heavy for the equipment designed for World War II aircraft.

Improvement in long-range shore-based patrol and conventional ship-based ASW helicopter capability combined with the increasing difficulty maintaining surplus WWII carriers led to most of these ships being retired or docked by smaller nations from the 1970s to the mid-1980s. This trend in ASW force draw-down only accelerated with the massive reduction in the operational Soviet/Russian submarine fleet, which rarely went to sea in large numbers in the 1990s. Ships that could be called dedicated ASW carriers are now only found within the Japan MSDF, which operates helicopters and no fixed-wing carrier-based aircraft of any kind. Even the United States Navy, the last nation to regularly operate a dedicated fixed-wing carrier-based ASW aircraft, the S-3 Viking, on its mixed-role super carriers had already removed most ASW equipment in the 1990s from this aircraft and has now removed this type from service as of January 2009 without replacement.[3] The Argentine Navy, currently without much hope of a replacement CATOBAR carrier of its own, trained several times a year landings and takeoffs of their S-2 Turbo Trackers aboard the Brazilian aircraft carrier São Paulo until this carrier was also retired.

Much easier to operate from small decks than fixed-wing aircraft were ASW helicopters, which flew from the decks of nearly all allied conventional carriers to this day and most LPH or STOVL carriers operated by the Soviet, Spanish, Italian, Japanese, British, and Thai navies.

Aircraft carriers and helicopter carriers that had primary ASW duties from the mid-1960s onward.