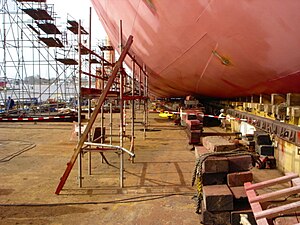 Ship hull being cleaned of fouling in drydock

Anti-fouling paint - a category of commercially available underwater hull paints (also known as bottom paints) - is a specialized category of coatings applied as the outer (outboard) layer to the hull of a ship or boat, to slow the growth and/or facilitate detachment of subaquatic organisms that attach to the hull and can affect a vessel's performance and durability (see also biofouling). Anti-fouling paints are often applied as one component of multi-layer coating systems [1] which may have other functions in addition to their antifouling properties, such as acting as a barrier against corrosion on metal hulls that will degrade and weaken the metal,[2] or improving the flow of water past the hull of a fishing vessel[3] or high-performance racing yachts.

In the Age of Sail, sailing vessels suffered severely from the growth of barnacles and weeds on the hull, called "fouling". Starting in the mid-1700’s thin sheets of copper and approximately 100 years later, Muntz metal, were nailed onto the hull in an attempt to prevent marine growth. One famous example of the traditional use of metal sheathing is the clipper Cutty Sark, which is preserved as a museum ship in dry-dock at Greenwich in England. Marine growth affected performance (and profitability) in many ways.

In an official 1900 Letter from the U.S. Navy to the U.S. Senate Committee on Naval Affairs,[5] it was noted that the (British) Admiralty had considered a proposal in 1847 to limit the number of iron ships (only recently introduced into naval service) and even to consider the sale of all iron ships in its possession, due to significant problems with biofouling. However, once an antifouling paint "with very fair results" was found, the iron ships were instead retained and continued to be built.

During World War II, which included a substantial naval component, the U.S. Navy provided significant funding[6] to the Woods Hole Oceanographic Institution to gather information and conduct research on marine biofouling and technologies for its prevention. This work was published as a book in 1952, the contents of which are available online as individual chapters.[7] The third and final part of this book includes a number of chapters that go into the state of the art at that time for the formulation of anti-fouling paints. Lunn (1974) provides further history.[8]

In modern times, antifouling paints are formulated with cuprous oxide (or other copper compounds) and/or other biocides—special chemicals which impede growth of barnacles, algae, and marine organisms. Historically, copper paints were red, leading to ship bottoms still being painted red today.[9]

"Soft", or ablative bottom paints slowly slough off in the water, releasing a copper or zinc based biocide into the water column. The movement of water increases the rate of this action. Ablative paints are widely used on the hulls of recreational vessels and typically are reapplied every 1–3 years.

"Hard" bottom paints, or "nonsloughing" bottom paints, are made in several types. "Contact leaching" paints "create a porous film on the surface. Biocides are held in the pores, and released slowly."[10] Another type of hard bottom paint includes Teflon and silicone coatings which are too slippery for growth to stick. SealCoat systems, which must be professionally applied, dry with small fibers sticking out from the coating surface. These small fibers move in the water, preventing bottom growth from adhering.[10]

In the 1960s and 1970s, commercial vessels commonly used bottom paints containing tributyltin, which has been banned in the International Convention on the Control of Harmful Anti-fouling Systems on Ships of the International Maritime Organization due to its serious toxic effects on marine life (such as the collapse of a French shellfish fishery).[11] The Port of San Diego is investigating how to reduce copper input from copper-based antifouling coatings [12] and Washington State has passed a law which may phase in a ban on copper antifouling coatings on recreational vessels beginning in January 2018.[13] However, despite the toxic chemistry bottom paint and its accumulation in water ways across the globe a similar ban was rescinded in the Netherlands after the European Union's Scientific Committee on Health and Environmental Risks concluded The Hague had insufficiently justified the law. In an expert opinion, the committee concluded the Netherlands government's explanation "does not provide sufficient sound scientific evidence to show that the use of copper-based antifouling paints in leisure boats presents significant environmental risk." [14]

A possible future replacement for antifouling paint may be slime. A mesh would cover a ship's hull beneath which a series of pores would supply the slime compound. The compound would turn into a viscous slime on contact with water and coat the mesh. The slime would constantly slough off, carrying away micro-organisms and barnacle larvae.[19][20]