listen);[5][6] Scottish Gaelic: Ànsruthair) is a small coastal resort town in Fife, Scotland, situated on the north-shore of the Firth of Forth[7] and 9 mi (14 km) south-southeast of St Andrews. The town comprises two settlements, Anstruther Easter and Anstruther Wester,[7] which are divided by a stream, the Dreel Burn. With a population of 3,500, it is the largest community on the Firth of Forth's north-shore coastline known as the East Neuk. To the east, it merges with the village of Cellardyke.[7]

Founded as a fishing village, Anstruther is home to the Scottish Fisheries Museum. Its main industry is now tourism, although other small-scale manufacturing and service industries continue.[citation needed] Recreational vessels are now moored in the harbour, and a golf course is situated near the town. Anstruther Pleasure Cruises operate sightseeing/wildlife cruises from the harbour to the Isle of May, the UK's primary puffin location, on board the vessel the May Princess from April to October. An abundance of other wildlife, including seal colonies, also inhabit the island.

The Waid Academy, the local state comprehensive school, is a focus of the community and through its secondary role as a community centre. Anstruther has a parish church at its centre that is on a small hill. This structure incorporates a tower/spire feature rare to Britain, but common to the area.

Anstruther War Memorial is located in the cemetery, somewhat further inland. It is of an unusual war memorial form, being totally flat to the ground, in the centre of a landscaped roundel, broadly adopting the shape of a celtic cross.

The town has several fish and chip shops. The Anstruther Fish Bar, which won Fish and Chip shop of the year in 2001–2002, was awarded the same prize once again by the Sea Fish Organisation in 2009.

Anstruther is home to Scotland's only true-scale model Solar System.[8] The model, which shows the Sun and planets and the distances between them all at the same scale of 1 to ten thousand million, is located mostly in the town centre. It stretches almost 600 m from the Sun to Pluto.

Anstruther is close to the Caves of Caiplie situated on the coastal path to Crail. 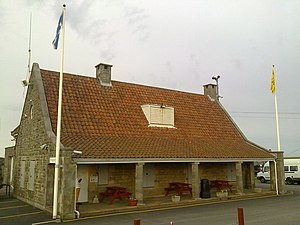 Following the end of the Cold War, one of Anstruther's best-kept secrets has become a major tourist attraction. A secret nuclear bunker, built in 1951 and operational until 1993, is located on the B940 near the village. During its operational life, it looked like an ordinary domestic dwelling, but has been renovated and is now open to the public as a museum.[9] The bunker was a subsidiary Regional Seat of Government in time of possible nuclear emergency and would have been occupied by the UK Armed Forces, UKWMO, Royal Observer Corps, and other Civil Service personnel.

Somewhat out from the town centre, in Anstruther Wester, stands the Dreel Tavern, taking its name from the adjacent burn. This building dates from the 17th century. Nearby is Buckie House, built in the late 17th century and restored in 1968 by W Murray Jack. The east gable was decorated with scallop shells and whelks or 'buckies' by the slater Andrew Batchelor in the mid 19th century.[10] Its exterior was restored in 2010.[11]

Anstruther-Easter and -Wester are separated by a small stream called Dreel Burn.[6] Their parishes and that of nearby Kilrenny are immensely historic.

Local tradition states that early in the 12th century, Alexander I of Scotland granted the lands of Anstruther to a William de Candela. However, no records survive of this original grant, and the earliest recorded lord of Anstruther was mentioned in a charter of 1225. There have been several theories as to the origin of the, possibly mythical, William, but recent research has suggested he may have been a Norman from Italy. There is evidence that William the Conqueror sought assistance from William, Count of Candela. He sent his son (or possibly his grandson). It may be this was the William de Candela, who received the grant of land from Alexander.[14] William de Candela's son, another William, was said to be a benefactor to the monks of Balmerino Abbey. Balmerino was founded in 1229, long after the likely lifetime of this William. Land in Anstruther Easter, on which a chapel was built and now occupied by the Scottish Fisheries Museum, was gifted to Balmerino by another William, sometime in the 1280s. Both this suggestion, and the Italian origin theory are inaccurate. The de Candela family actually came from Dorset, coming to England probably from Normandy in or around 1066. The de Candela name was dropped by a later generation, in a charter confirming a grant of land to Dryburgh Abbey in 1225, Henry is described as 'Henricus de Aynstrother dominus ejusdem'. His son, also called Henry, was a companion of Louis IX in his crusades to the Holy Land and also swore fealty to Edward I in 1292 and again in 1296.[14]

In 1225, it took the intervention of Pope Honorius III to settle a teinds dispute between the monks of Dryburgh Abbey and the fishermen of Anstruther, suggesting that, even then, the fishing was sufficiently good to warrant arguing over.[15] In December 1583, James VI of Scotland gave the town the status of a Royal Burgh and trading rights, recognizing the importance of the port, called the draucht of Anstruther. The bounds of the new Burgh were the "Silver Dyke" on the east, the low water line on the south, the Anstruther burn to the west, and the Kylrynnie march road.[16]

James Melville's diary provides a graphic account of the arrival of a ship from the Spanish Armada to Anstruther. Local tradition has long held that some of the survivors remained and intermarried with the locals.[6] In the 18th and 19th centuries, the town was home to The Beggar's Benison, a gentleman's club devoted to "the convivial celebration of male sexuality".[17][18]

By the 19th century, Anstruther-Easter, Anstruther-Wester, and Kilrenny were all separate royal and parliamentary boroughs. Anstruther-Easter held tanning, shipbuilding, and fish-curing establishments, as well as a coasting trade.[19] In 1871, the royal burgh of Anstruther-Easter had a population of 1169;[19] the parliamentary burgh, 1289. Anstruther-Wester held 484.[20] The Board of Fisheries constructed a new harbour in the 1870s,[19] completed by 1877 at a cost of £80,000.[6] By the First World War, the communities were connected to St Andrews by the North British Railway.[6] Codliver oil was also being produced.

Herring fishing remained a feature of the area until the mid-20th century when, after a record catch in 1936, the shoals mysteriously declined until the industry effectively disappeared by 1947.[15] At one time, the town was well served by trains on the Fife Coast Railway. The line was closed to passengers in 1965. Since the 1950s, Anstruther has been a summer tourist destination.

In the summer of 2018 a decision by Fife Council to build a new care home facility on the town's Bankie Park was reversed after a campaign by residents.[21][22]

Anstruther is twinned with:

James Anstruther (d. 1606) was a laird of Anstruther and a courtier, and his son Robert Anstruther was a diplomat during the Thirty Years' War. Sir James Lumsden, a soldier of fortune under Gustavus Adolphus was born in the parish of Kilrenny about 1598.[6]

William Tennant's poem "Anster Fair" concerns the town's celebration. Thomas Chalmers, co-founder of the Free Church of Scotland, was born in Anstruther-Easter, where his house has been preserved.[19] The Goodsir brothers were born and brought up in Anstruther. They were John Goodsir (1814–1867), the anatomist;[6] Harry Goodsir, surgeon on the ill-fated Franklin expedition,[24] Robert Anstruther Goodsir who travelled to the Arctic searching for him,[25] and Joseph Taylor Goodsir, who became a minister and theologian.[26] David Martin (1737–1798), the painter and engraver;[6] and Robert Fowler (1853–1926), artist,[citation needed] were natives of Anstruther.

Author Jessie Kerr Lawson (1838-1917) lived for a time in the town, and her sons Andrew Cowper Lawson (1861-1952), geologist, and James Kerr Lawson (1862-1939), painter, were born there. Andrew discovered and named the San Andreas Fault and the mineral Lawsonite is named after him. The family emigrated to Canada where another son, Abercrombie Anstruther Lawson (1870-1927), founding professor of botany at the University of Sydney, was born.[27][28][29]

Princess Titaua Marama, Chiefess of Haapiti in Polynesia lived in Anstruther from 1892 until she died there in 1898, aged 55. A blue plaque marks the house in which she lived.[30] A book has been written about her life by the British-American author, Fiona J Mackintosh.[31]

Archibald Constable, Sir Walter Scott's publisher, was born in the parish of Carnbee, about three miles to the north of Pittenweem.[6] Sir Robert Hamilton Bruce Lockhart (1887–1970), director-general of the Political Warfare Executive during World War II, was also born in Anstruther.[citation needed]

Sports writer Graham Spiers hails from Anstruther. It was the childhood home of BBC Radio 1 DJ Edith Bowman. Anstruther has become known as the base for the Fence Collective, a network of nu-folk musicians.

Traditionally, the two Anstruthers returned a single Member of Parliament (MP) together with Kilrenny, Pittenweem, St Andrews, Cupar, and Crail.[19]

Anstruther is in the North East Fife UK Parliament constituency (MP is currently Wendy Chamberlain of the Scottish Liberal Democrats) and the North East Fife Scottish Parliament constituency. In the 2017 General Election Stephen Gethins MP retained his seat by a majority of only two votes. There were three recounts. The narrowly defeated candidate was Lib Dem Elizabeth Riches, a resident of Anstruther and former local councillor. The MSP is currently Willie Rennie, who won back the seat for the Lib Dems from Roderick Campbell of the SNP. Anstruther is in the Mid-Scotland and Fife Scottish Parliamentary region. Prior to Brexit in 2020 it was part of the Scotland European Parliament constituency. In local politics the ward of East Neuk and Landward (of which Anstruther is part) elects three councillors to Fife Council under the single transferable vote system.