Ambleston (Welsh: Treamlod) is a village, parish, and community in Pembrokeshire, Wales, lying seven miles (11 km) north-north-east of Haverfordwest. The parish includes the hamlets of Wallis and Woodstock (Welsh: Wstog).

The English and Welsh placenames both mean "Amlot's farm", Amlot being a Norman-French personal name.[2]

The northern border of the parish is an ancient trackway leading towards St David's, which crosses through a Roman farmstead called "Castell Fflemish".[3] This line is also the northern boundary of the cantref of Daugleddau, and was described by George Owen in 1602 as the language frontier, placing Ambleston in Little England beyond Wales.

With the communities of Spittal and Wiston, it makes up the Pembrokeshire electoral ward of Wiston.

A kilometer north of the village is a four-sided low bank enclosing an area some 80m across, at 51°54′14″N 4°53′53″W﻿ / ﻿51.904°N 4.8981°W﻿ / 51.904; -4.8981﻿ (Castle Flemish), SN007267. The feature had been presumed to relate to Roman military activity, and became known as Castle Flemish, or Castell Ffleming. It also came to be associated with the name 'Ad Vigessimum', a fort described by Richard of Cirencester, but this is now thought spurious.[5] An excavation in 1922 by Mortimer Wheeler found Roman brick and flue tiles, along with various Roman ceramics and roof tiles. These indicate a compound including a bathhouse and living area, and is considered to be a late first-century farmstead or villa. In the nineteenth century there were rumours of a 'golden table' being found here but these remain unsubstantiated.[5] The site is a Scheduled ancient monument. 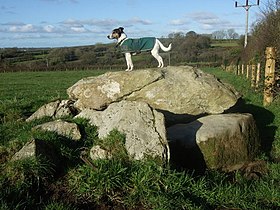