listen) OL-tən) is a village in Staffordshire, England.[2] It is noted for the theme park Alton Towers, built around the site of Alton Mansion, which was owned by the Earls of Shrewsbury,[3] and designed by Augustus Pugin.[4] In the 1914 map by Whiston, there were copper works in the village.[2]

The village is on the eastern side of the Churnet.[5] It is mentioned in the Domesday Book, and contains numerous buildings of architectural interest; the Round-House, Alton Castle (now a Catholic youth retreat centre), St Peter's Church, The Malt House, St John's Church and Alton Towers.[6]

Alton was served by the Alton railway station which was opened by the North Staffordshire Railway on 13 July 1849 and closed in January 1965.[4]

The Chained Oak in Alton has been made famous by the ride Hex – The Legend of the Towers at Alton Towers and the legend involving the Earl of Shrewsbury.[7] 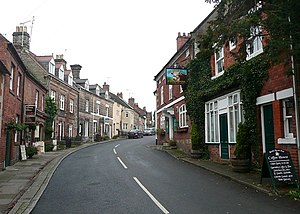