Allan Hills 84001 (commonly abbreviated ALH84001[1]) is a fragment of a Martian meteorite that was found in the Allan Hills in Antarctica on December 27, 1984, by a team of American meteorite hunters from the ANSMET project. Like other members of the shergottite–nakhlite–chassignite (SNC) group of meteorites, ALH84001 is thought to have originated on Mars. However, it does not fit into any of the previously discovered SNC groups. Its mass upon discovery was 1.93 kilograms (4.3 lb).

In 1996, a group of scientists claimed to have found evidence for microscopic fossils of bacteria in the meteorite, suggesting that these organisms also originated on Mars. The claims immediately made headlines worldwide, culminating in then-U.S. president Bill Clinton giving a speech about the potential discovery.[2] These claims were controversial from the beginning, and the wider scientific community ultimately rejected the hypothesis once all the unusual features in the meteorite had been explained without requiring life to be present. Despite there being no convincing evidence of Martian life, the initial paper and the enormous scientific and public attention caused by it are considered turning points in the history of the developing science of astrobiology.[3] 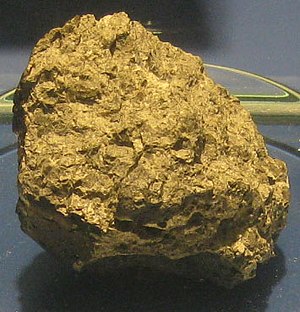 ALH84001 on display at the Smithsonian Museum of Natural History

ALH 84001 was found on the Allan Hills Far Western Icefield during the 1984-85 season, by Roberta Score, Lab Manager of the Antarctic Meteorite Laboratory at the Johnson Space Center.[4]

ALH84001 is thought to be one of the oldest Martian meteorites, proposed to have crystallized from molten rock 4.091 billion years ago.[5] Based on chemical analyses, it is thought to have originated on Mars[6][7] during a period when liquid water existed on the planet's surface.[8][9]

In September 2005, Vicky Hamilton of the University of Hawaii at Manoa presented an analysis of the origin of ALH84001 using data from the Mars Global Surveyor and 2001 Mars Odyssey spacecraft orbiting Mars. According to the analysis, Eos Chasma in the Valles Marineris canyon appears to be the source of the meteorite.[10] The analysis was not conclusive, in part because it was limited to areas of Mars not obscured by dust.[citation needed]

The theory holds that ALH84001 was blasted away from the surface of Mars by the impact of another meteor about 17 million years ago,[11] and fell on Earth roughly 13,000 years ago.[12] These dates were established by a variety of radiometric dating techniques, including samarium–neodymium (Sm–Nd), rubidium–strontium (Rb–Sr), potassium–argon (K–Ar), and carbon-14 dating.[13][14] Other meteorites that have potential biological markings have generated less interest because they do not contain rock from a "wet" Mars; ALH84001 is the only meteorite originating from a time period during which Mars is suspected to have supported liquid water.[3]

In October 2011 it was reported that isotopic analysis indicated that the carbonates in ALH84001 were precipitated at a temperature of 18 °C (64 °F) with water and carbon dioxide from the Martian atmosphere. The carbonate carbon and oxygen isotope ratios imply deposition of the carbonates from a gradually evaporating subsurface water body, probably a shallow aquifer meters or tens of meters below the surface.[9] 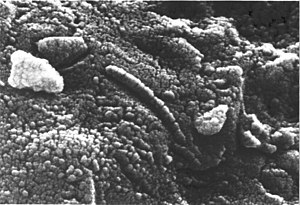 On August 6, 1996, a team of researchers led by NASA scientists including lead author David S. McKay published an article in Science claiming that the meteorite may contain trace evidence of life from Mars.[3][16] Under a scanning electron microscope, structures were visible that some scientists interpreted as fossils of bacteria-like lifeforms. The structures found on ALH84001 are 20–100 nanometres in diameter, similar in size to theoretical nanobacteria, but smaller than any cellular life known at the time of their discovery. If the structures had been fossilized lifeforms, as was proposed by the so-called biogenic hypothesis of their formation, they would have been the first solid evidence of the existence of extraterrestrial life, aside from the chance of their origin being terrestrial contamination.[17]

The announcement of possible extraterrestrial life caused considerable controversy. When the discovery was announced, many immediately conjectured that the fossils were the first true evidence of extraterrestrial life—making headlines around the world, and even prompting President of the United States Bill Clinton to make a formal televised announcement to mark the event.[18]

McKay argued that likely microbial terrestrial contamination found in other Martian meteorites does not resemble the microscopic shapes in ALH84001. In particular, the shapes within ALH84001 look intergrown or embedded in the indigenous material, while likely contamination does not.[19] While it has not yet conclusively been shown how the features in the meteorite were formed, similar features have been recreated in the lab without biological inputs by a team led by D.C. Golden.[20] McKay says these results were obtained using unrealistically pure raw materials as a starting point,[3] and "will not explain many of the features described by us in ALH84001." According to McKay, a plausible inorganic model "must explain simultaneously all of the properties that we and others have suggested as possible biogenic properties of this meteorite."[20] The rest of the scientific community disagreed with McKay.[3]

In January 2010, a team of scientists at Johnson Space Center, including McKay, argued that since their original paper was published in November 2009, the biogenic hypothesis has been further supported by the discovery of three times the original amount of fossil-like data, including more "biomorphs" (suspected Martian fossils), inside two additional Martian meteorites, as well as more evidence in other parts of the Allan Hills meteorite itself.[21]

However, the scientific consensus is that "morphology alone cannot be used unambiguously as a tool for primitive life detection."[22][23][24] Interpretation of morphology is notoriously subjective, and its use alone has led to numerous errors of interpretation.[22]

Features of ALH84001 that have been interpreted as suggesting the presence of microfossils include: