The first ship entered service in November 1980, and two of the six ships are active as of 2018. Canberra and Adelaide were paid off in 2005 and 2008 respectively, and later sunk as dive wrecks: their decommissioning was to offset the cost of a A$1 billion weapons and equipment upgrade to the remaining four ships. Sydney was decommissioned in late 2015, after spending most of the year as a moored training ship and Darwin was decomissioned in late 2017. The Hobart-class air-warfare destroyers have been progressively replacing the last four frigates from 2016 onwards.

Following the cancellation of the Australian light destroyer project in 1973, the British Type 42 destroyer and the American Oliver Hazard Perry-class frigate were identified as alternatives.[1] Although the Type 42 met the RAN's requirements as a replacement for the cancelled light destroyers and the Daring-class destroyers, fitting the ship with the SM-1 missile would have been difficult.[1] On the other hand, the Perry class was still at the design stage; a design that was described by assessment project staff as "a second rate escort that falls short of the DDL [light destroyer] requirements on virtually every respect".[1][2] Despite this, the Australian government approved the purchase of two US-built Perry-class ships in 1974.[1]

The risk of acquiring an unproven design was seen as acceptable because of the success of the USN's Charles F. Adams-class destroyer (of which the RAN operated three ships as the Perth class), when compared to the equivalent British ships the RAN would have purchased.[2] Final government approval to order two ships was granted in 1976, with a third ship ordered in 1977.[3] The order was expanded in April 1980 with the order of a fourth unit.[4] These four ships were built by Todd Pacific Shipyards of Seattle, Washington, as part of the USN's shipbuilding program, and were assigned USN hull numbers during construction, which were replaced with RAN pennant numbers upon entering service.[5] The first, HMAS Adelaide (USN hull number FFG-17, RAN pennant number FFG 01) was built to the Flight I design, while Canberra (FFG-18/FFG 02) and Sydney (FFG-35/FFG 03) were the first and last ships of the Flight II design, respectively.[5] The final American-built ship was Darwin (FFG-44/FFG 04); constructed to the Flight III design.[5] In 1980, two more ships (Melbourne and Newcastle) were ordered, but were built in Australia by AMECON of Williamstown, Victoria, and did not receive USN numbers.[4][5]

Since the withdrawal of the Perth-class destroyers, these ships are the RAN's primary air defence vessels, armed with a Mark 13 missile launcher for SM-2 missiles. They also have significant anti-surface capability, being armed with a 76-millimetre (3.0 in) Mk 75 gun and the Harpoon ASM (also fired by the Mark 13 launcher), and a pair of triple torpedo tubes for ASW. In addition, two S-70B Seahawk helicopters are carried. 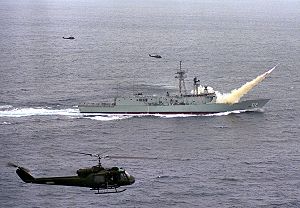 From 2005 onwards, all RAN frigates deploying to the Persian Gulf are fitted with two M2HB .50 calibre machine guns in Mini Typhoon mounts, installed on the aft corners of the hangar roof.[6] Two TopLite EO directors are used with the guns.[6]

The Australian frigates were originally fitted with American Mark 46 anti-submarine torpedoes, but by 2008, they had been replaced with the European MU90 Impact torpedo in three of the four frigates as part of the FFG Upgrade, with the conversion of Newcastle underway at that point.[7]

There have been two major upgrades distinguishing the Adelaide class from the American Oliver Hazard Perry-class frigates.

The first three ships were constructed to the Perry class' 'short' hull design (Flight I and II), with an identical length for both the main deck and the keel.[5] Ships from FFG-36 onwards (including Darwin) were built with an increase in overall length—achieved by angling the transom (the section between the fantail and the keel) to increase the area of the flight deck and allow the operation of Seahawk helicopters.[5] Adelaide, Canberra, and Sydney were later upgraded to match the slightly larger ships, and were fitted with the updated sonars and ESM systems of the Flight III design.[5]

In the mid-1990s, the Australian government commenced SEA 1390, also known as the FFG Upgrade Project.[8] Originally costing A$1 billion, which has expanded to A$1.46 billion, the project includes improvements to the combat and fire control system, the sonar suite, and the air defence missiles.[8] The upgrade was for four ships and intended to expand their service life to approximately 2020.[8] The project cost was partly offset by the decommissioning of the two oldest units:[9] Canberra paying off in 2005 and Adelaide in 2008. Modification of each ship took place at Garden Island Dockyard, with Australian Defence Industries (ADI, now Thales Australia) selected as project leader for the upgrade phase of the project.[8]

After the refit, the ships are capable of firing SM-2MR and RGM-84 Harpoon missiles from the Mark 13 launcher.[8] An 8-cell Mark 41 Vertical Launch System for Evolved Sea Sparrow Missile has also been installed forward of the Mark 13 launcher.[8] The Phalanx CIWS was upgraded to Block 1B,[verification needed] and the torpedoes, missiles, and other ship-mounted weapons were upgraded to the latest versions.[8]

By January 2008, the FFG Upgrade Project was running at least four years behind schedule.[10] The frigates' anti-missile and anti-torpedo detection and defence systems could not be integrated as intended, leaving the ships vulnerable to attack.[10] The first ship refitted, HMAS Sydney, was initially not accepted back into service by the RAN because of the problems, which have also prevented any refitted ship from serving in a combat zone.[11] Australian Defence Association executives and serving navy personnel have blamed both political parties for the problems: while the Howard Liberal government was responsible for the project, the preceding Labor government chose to maintain the frigates instead replacing them with the more expensive and much more labour-intensive, but more capable Kidd-class destroyers in the early 1990s.[8][11]

Sydney (foreground) and Darwin alongside at Fleet Base East in 2011

By November 2008, Darwin's upgrade had been completed, while the problems experienced with Sydney had been rectified in both ships.[12] It is planned to start deploying these warships to the Gulf in 2009.[12] The RAN and Thales subsequently claimed that the two upgraded ships were the "most capable ships in the history of the RAN", and that once the other two Adelaides were upgraded, the navy would possess the "most lethal frigate fleet on earth".[12] It was reported at the same time that other nations operating guided missile frigates, including the United States, Canada, Greece, and Turkey, were considering similar upgrades.[12]

Canberra was subsequently sunk as a dive wreck on 4 October 2009, 2 nautical miles (3.7 km; 2.3 mi) off Ocean Grove, Victoria, in 30 metres (98 ft) of water.[14] Adelaide was converted into a dive wreck, but plans to scuttle her off Avoca Beach, New South Wales in April 2010 were postponed following protests by resident action groups and a tribunal hearing, which ordered the removal of wiring and paint from sections of the frigate before she was sunk on 13 April 2011.[15][16][17]

Sydney entered port for the final time in February 2015, but remained commissioned as an alongside training ship until 7 November.[18][19] In May 2017, having not received any offers to convert the hull for use as a dive wreck, Sydney was sold for scrap.[20]

Darwin arrived in Sydney for the last time on 1 November 2017, prior to her decommissioning ceremony on 9 December.[21][22]

The upgraded Adelaide-class frigates will be replaced by three new Hobart class Air Warfare Destroyers, equipped with the Aegis combat system, starting around 2016.

In April 2017, the Polish government officially expressed interest in purchasing two of the remaining three frigates when they are retired from service.[23][24]

Websites and other media