Rescue groups from around the world joined local relief workers and the Taiwanese military in digging out survivors, clearing rubble, restoring essential services and distributing food and other aid to the more than 100,000 people made homeless by the quake. The disaster, dubbed the "Quake of the Century" by the local media, had a profound effect on the economy of the island and the consciousness of the people, and dissatisfaction with government's performance in reacting to it was said by some commentators to be a factor in the unseating of the ruling Kuomintang party in the 2000 presidential election.

USGS ShakeMap for the event

The earthquake struck at 01:47:12.6 TST on Tuesday, 21 September 1999 (i.e., 1999-09-21, hence "921"). The epicenter was at 23.77° N latitude, 120.98° E longitude, 9.2 km (5.7 mi) southwest of Sun Moon Lake, near the town of Jiji (Chi-Chi), Nantou County. The tremor measured 7.7 on the Moment magnitude scale and 7.3 on the Richter scale,[8] and the focal depth was 8.0 km (5.0 mi). The Central Weather Bureau recorded a total of 12,911 aftershocks in the month following the main tremor.[9] The total energy released is estimated to be 2.1 × 1017 J,[10] approximately the same as the yield of the Tsar Bomba. The earthquake was in an unusual location for Taiwan, which experiences the majority of its earthquakes off the eastern coast, with such quakes normally causing little damage.[11] One of the aftershocks, on 26 September, was a strong earthquake in its own right, measuring 6.8 on the Richter scale and causing some already weakened buildings to collapse, killing another three people.[12]

At the time of the quake, Taiwan had the most extensive network of sensors and monitoring stations in the world, resulting in "probably the best data set ever collected for an earthquake".[13] At one station, a peak ground motion of 300 cm/s (3 m/s; 10 ft/s) was recorded, the highest ever measurement taken in an earthquake anywhere.[11] Soil liquefaction was observed at Yuanlin and caused settlement of building foundations and filling in of water wells from sand boils.[11] The earthquake occurred along the Chelongpu Fault [zh] in the western part of the island of Taiwan. The fault stretches along the foothills of the Central Mountains in Nantou County and Taichung County (now part of Taichung City). Some sections of land near the fault were raised as much as 7 m (23 ft). Near Dongshih, near the northern end of the fault, a nearly 7 m (23 ft) high waterfall was created by the earthquake as the surface rupture offset the channel of the Dajia River.[14] The total surface rupture was about 100 km in length.[15]

Tunghsing Building, in Taipei City, after the quake.

Damage caused by the earthquake included 2,415 deaths, 29 missing, 11,305 severely wounded, with 51,711 buildings completely destroyed, 53,768 buildings severely damaged, and a total of NT$300 billion (US$10 billion) worth of damage.[16] Power was cut to a large proportion of the island, due to damage to power stations, transmission stations, and the automatic shutdown of Taiwan's three nuclear power plants, which were restarted two days later.[17] National electricity provider Taipower stated that a day after the quake power had been restored to 59% of the country.[18] 102 major bridges were badly damaged, with many having to be torn down.[19] The Central Cross-Island Highway, at the time the only major complete route across the mountains in central Taiwan, was badly damaged. Subsequent storm damage and the high cost of restoration means that the highway remains partially closed as of 2018. There were a total of 132 landslides during the main quake and the aftershocks, some causing loss of life as rockfalls crushed houses.[20] 870 schools suffered damage, with 125 severely damaged, closing many down for months or even permanently in a few cases.[21]

The effects of the earthquake were most severe in central Taiwan, particularly in Nantou County and Taichung County. Towns such as Puli suffered huge damage, and the majority of the casualties were concentrated in these regions. Due to the relatively remote location of many of the affected settlements, aid from the central government took some time to reach some survivors. The Port of Taichung, one of Taiwan's major commercial harbours, was badly damaged and had to be temporarily closed.[22]

In Taipei City, far from the epicenter of the quake, buildings were shaken, but just one, the 12-story Tunghsing Building [zh], collapsed as a result of the tremor. 87 people died in the rubble of the building, which was later found to be unsoundly built, with structural pillars and beams stuffed with plastic bottles and newspaper instead of brick and concrete.[23] Blame for the collapse was levelled by survivors at both the construction company which built the high-rise and local government for lax enforcement of building codes and safety standards. Five people were indicted in the wake of the disaster.[23]

The Taiwan Stock Exchange was closed for business for five days following the earthquake.[24] A significant proportion of the world supply of computer memory chips (RAM) was at the time made in Taiwan, and the six-day shutdown of Hsinchu Science Park and other factories resulting from the quake caused computer memory prices to triple on world markets.[25] With Taiwan struggling to recover from the after-effects of the 1997 Asian Financial Crisis, the economic damage of the earthquake was a great cause for concern, with estimates that the total cost would be some 10% of the entire gross domestic product of the country in 1999.

The immediate rescue efforts were still ongoing when public anger began to mount at shoddy construction that many felt was responsible for the high number of casualties. Legal building codes, enforcement of those codes, and the construction companies themselves all came in for criticism. Constructors and architects of modern buildings that collapsed were detained by the authorities, their assets frozen and travel documents seized.[26] One of the issues highlighted after the quake was "soft stories": high, open ground floors in high-rise buildings with little structural support. This led to the ground floor collapsing first in a quake, either toppling the other floors or starting a pancake collapse.[11] Buildings in Taiwan over 50 metres (160 ft) tall require a peer review process; no building that had undergone this process collapsed, contrasting with a number of dramatic failures of buildings just under 50 metres in height.[11]

Immediately following the earthquake an emergency cabinet meeting was convened to discuss how to tackle the aftermath. The same day the ROC military was mobilised, with large numbers of conscripted soldiers heading to stricken regions to assist in distributing emergency supplies, clearing roads, and rescuing people trapped in the rubble. Helicopters were used to evacuate injured people from mountainous regions to hospitals, and to supply food to communities inaccessible by road.[27] The military also assumed the leading role in recovering the dead from damaged structures.[11]

One of the last people to be rescued was a six-year-old boy pulled alive from the rubble of his collapsed home in Taichung County by a team of South Korean and Japanese search and rescue workers, some 88 hours after the quake.[28] Even later, nearly 130 hours after the earthquake, two brothers emerged alive from the ruins of the Tunghsing Building in Taipei to the astonishment of rescuers. The brothers survived on the water sprayed from fire hoses, rotten fruit, and their own urine.[29]

There was widespread international sympathy for those affected by the earthquake, and over 700 rescue workers from more than 20 countries aided in the immediate aftermath.[30] Initially Taiwan's isolated diplomatic situation caused a delay in a response from the United Nations, which recognises the People's Republic of China as the only government on the island, and so could not act without the approval of the Beijing government.[31] 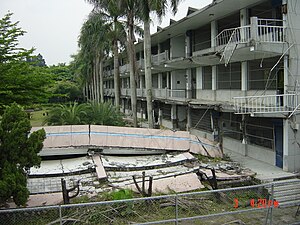 On 25 September President Lee Teng-hui declared a state of emergency in the affected areas, giving sweeping powers to local authorities to ignore the usual bureaucratic and legal restrictions on measures to bring relief to people and locations most in need. This was the first time emergency powers had been used since the death of former President Chiang Ching-kuo in 1989.[35]

Many charities, corporations, and private individuals contributed to the relief effort and the later reconstruction. Private donations directly to the government-run disaster fund totalled NT$33.9 billion,[36] while organisations including the Presbyterian Church of Taiwan, Rotary International, Cathay Life Insurance, Dharma Drum Mountain, I-Kuan Tao, the Tzu Chi Foundation and various temple, church, and community groups all contributed to aiding survivors and funding reconstruction.[37] The Church of Jesus Christ of Latter-day Saints provided both direct relief and translation services for the foreign rescue teams,[38] while the Red Cross of the People's Republic of China contributed US$3m to the Red Cross Society of the Republic of China, which amassed a fund of NT$1.8bn towards disaster relief.[39]

Following the election of President Chen Shui-bian on March 2000, the reconstruction policies were continued despite the change in ruling party. Chen said in his inaugural address in May 2000 that "our people experienced an unprecedented catastrophe last year, and the wounds are yet to be healed. The new cabinet feels that restoration cannot be delayed ... Reconstruction has to cover every victim and every earthquake-affected area."[40]

One task that had to be undertaken was the setting of new land ownership boundaries in areas where the landscape had been significantly altered by the quake. The whole island was elongated about 1.5 metres (4 ft 11 in) in the north-south axis and compressed west-east by the forces unleashed. One solution offered to land issues was to offer landowners an equivalent parcel of government land not located on a fault line.[41] 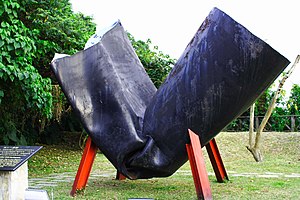 The quake has become part of the Taiwanese consciousness, and is often referred to simply as 9-21 (九二一; Jiǔ'èryī) after the date it occurred (21 September). Unhappiness with the government's performance in response to the disaster was reflected in a drop in support for vice-president Lien Chan who was standing as the Kuomintang candidate for the 2000 presidential election.[43]

In Wufeng, a township in southern Taichung County, the damage was especially devastating; the village's Guangfu Junior High School lay directly on the fault line and was severely damaged by the quake. Today the junior high school is the site of the National Museum of Natural Science's 921 Earthquake Museum.[9]

A fault from the earthquake was discovered in Zhushan Township, Nantou County by a professor from National Taiwan University conducting research in the area in November 2002. To preserve the surface rupture, the Chelungpu Fault Preservation Park was established and opened to the public in 2013.[44]

A permanent fault shift in Shigang District resulted in serious damage to the Shihgang Dam, as well as the necessity of patching affected roads and trails with inclines, in order to restore their usefulness. Two notable examples of this are the biking/hiking trail between Dongshi District and Fengyuan District, and Fengshi Road which also connects these two districts. Some locals humorously call this new inclination "Singapore", in Chinese (新加坡; 'newly-added slope').[citation needed]

The tenth anniversary of the earthquake in 2009 was marked by commemorative activities in some of the areas affected. Taipei, Dongshi, Wufeng, Puli, Jiji (Chi-Chi) and Zhongxing Xincun held various events to remember the victims of the earthquake, the rescuers who aided them, and the reconstruction efforts which followed.[45]