From Encyclopedia Britannia
Jump to navigation Jump to search
This article is about the year 1347.
Calendar yearTemplate:SHORTDESC:Calendar year

The Mamluke Empire is hit by the plague in the autumn.[3] Baghdad is hit in the same year.[4]

After years of resistance against the Delhi Sultan Muhammad bin Tughluq, the Bahmani Kingdom, a Muslim Sultanate in Deccan, was established on August 3, when King Ala-ud-din Hasan Bahman Shah was crowned in a mosque in Daulatabad.[5] Later in the year, the Kingdom's capital was moved from Daulatabad to the more central Gulbarga.[6][7] Southeast Asia suffered a drought which dried up an important river which ran through the capital city of the Kingdom of Ayodhya, forcing the King to move the capital to a new location on the Lop Buri River.[8] 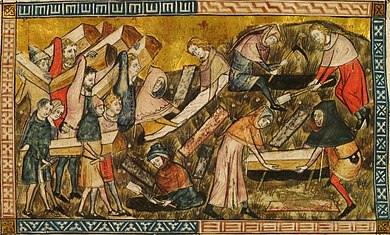 On 2 February the Byzantine Empire's civil war between John VI Kantakouzenos and the regency ended with John VI entering Constantinople. On 8 February, an agreement was concluded with the empress Anna of Savoy, whereby he and John V Palaiologos would rule jointly. The agreement was finalized in May when John V married Kantakouzenos' 15-year-old daughter. The war had come at a high cost economically and territorially, and much of the Empire was in need of rebuilding.[9] To make matters worse, in May Genoese ships fleeing the Black Death in Kaffa stopped in Constantinople. The plague soon spread from their ships to the city.[10] By autumn, the epidemic had spread throughout the Balkans, possibly through contact with Venetian ports along the Adriatic Sea.[11] Specific cases were recorded in the northern Balkans on 25 December, in the city of Split.[12]

After being proclaimed Tsar of Serbia in the previous year by the newly-promoted Serbian Patriarch Joanikije II, Stefan Dušan continued his southern expansion by conquering Epirus, Aetolia and Acarnania, appointing his half-brother, despot Simeon Uroš as governor of those provinces.

On 20 May Cola di Rienzo, a Roman commoner, declared himself Emperor of Rome in front of a huge crowd in response to what had been several years of power struggles among the upper-class barony. Pope Clement VI, along with several of Rome's upper-class nobility, united to drive him out of the city in November.[13] In October, Genoese ships arrived in southern Italy with the Black Plague, beginning the spread of the disease in the region.[10][14] Jews were first accused of ritual murders in Poland in 1347.[15] Casimir III of Poland issues Poland's first codified collection of laws after the diet of Wiślica. Separate laws are codified for greater and lesser Poland.[16][17]

In the continuing Hundred Years' War, the English won the city of Calais in a treaty signed in September. In a meeting with the Estates General in November, the French King Phillip was told that in the recent war efforts they had "lost all and gained nothing."[18] Phillip, however, was granted a portion of the money he requested and was able to continue his war effort.[19] The English King Edward offered Calais a package of economic boosts which would make Calais the key city connecting England with France economically.[20] Edward returned to England at that height of his popularity and power and for six months celebrated his successes with others in the English nobility. Although the Kingdom's funds were largely pushed towards the war, building projects among the more wealthy continued, with, for example, the completion of Pembroke College in this year.[19]

The French city of Marseilles recognized the plague on 1 September and by 1 November it had spread to Aix-en-Provence. The earliest recorded invasion of the plague into Spanish territory was in Majorca in December 1347, probably through commercial ships.[12] Three years of plague began in England.[21]