Political boundaries in Eastern Hemisphere in early half of 11th century 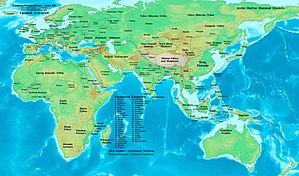 The 11th century is the period from 1001 to 1100 in accordance with the Julian calendar, and the 1st century of the 2nd millennium.

In the history of Europe, this period is considered the early part of the High Middle Ages.

There was, after a brief ascendancy, a sudden decline of Byzantine power and rise of Norman domination over much of Europe, along with the prominent role in Europe of notably influential popes. Christendom experienced a formal schism in this century which had been developing over previous centuries between the Roman West and Byzantine East, causing a split in its two largest denominations to this day: Roman Catholicism and Eastern Orthodoxy. In Northern Italy, a growth of population in urban centers gave rise to early organized capitalism and more sophisticated, commercialized culture by the late 11th century. In East Europe, there was the golden age for the principality of Kievan Rus.

The Fatimid Caliphate in Egypt, the Ghaznavids, and the Chola dynasty in India had reached their zenith in military might and international influence. The Western Chalukya Empire (the Chola's rival) also rose to power by the end of the century.

In this century the Turkish Seljuk dynasty comes to power in Western Asia over the now fragmented Abbasid realm, while the first of the Crusades were waged towards the close of the century.

In Japan, the Fujiwara clan continued to dominate the affairs of state.

In Korea, the Goryeo Kingdom flourished and faced external threats from the Liao dynasty (Manchuria).

In Vietnam, the Lý Dynasty began, while in Myanmar the Pagan Kingdom reached its height of political and military power.

In the Americas, the Toltec and Mixtec civilizations flourished in Central America, along with the Huari Culture of South America and the Mississippian culture of North America. The Tiwanaku Empire centered around Lake Titicaca collapsed in the first half of the century. 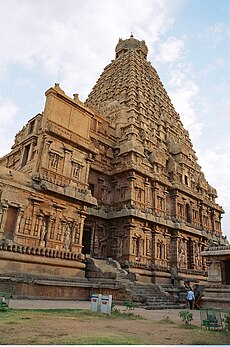 The Brihadeeswarar Temple of Chola era southern India, completed in 1010, during the reign of Rajaraja Chola I.

In European history, the 11th century is regarded as the beginning of the High Middle Ages, an age subsequent to the Early Middle Ages. The century began while the translatio imperii of 962 was still somewhat novel and ended in the midst of the Investiture Controversy. It saw the final Christianisation of Scandinavia and the emergence of the Peace and Truce of God movements, the Gregorian Reforms, and the Crusades which revitalised a church and a papacy that had survived tarnished by the tumultuous 10th century. In 1054, the Great Schism rent the church in two, however.

In Germany, the century was marked by the ascendancy of the Holy Roman Emperors, who hit their high-water mark under the Salians.

In Italy, it opened with the integration of the kingdom into the empire and the royal palace at Pavia was summoned in 1024. By the end of the century, Lombard and Byzantine rule in the Mezzogiorno had been usurped by the Normans and the power of the territorial magnates was being replaced by that of the citizens of the cities in the north.

In Britain, it saw the transformation of Scotland into a single, more unified and centralised kingdom and the Norman conquest of England in 1066. The social transformations wrought in these lands brought them into the fuller orbit of European feudal politics.

In France, it saw the nadir of the monarchy and the zenith of the great magnates, especially the dukes of Aquitaine and Normandy, who could thus foster such distinctive contributions of their lands as the pious warrior who conquered Britain, Italy, and the East and the impious peacelover, the troubadour, who crafted out of the European vernacular its first great literary themes. There were also the first figures of the intellectual movement known as Scholasticism, which emphasized dialectic arguments in disputes of Christian theology as well as classical philosophy.

In Spain, the century opened with the successes of the last caliphs of Córdoba and ended in the successes of the Almoravids. In between was a period of Christian unification under Navarrese hegemony and success in the Reconquista against the taifa kingdoms that replaced the fallen caliphate.

A Scholar in a Meadow, Chinese Song dynasty, 11th century.

In China, there was a triangular affair of continued war and peace settlements between the Song dynasty, the Tanguts-led Western Xia in the northwest, and the Khitans of the Liao dynasty in the northeast. Meanwhile, opposing political factions evolved at the Song imperial court of Kaifeng. The political reformers at court, called the New Policies Group (新法, Xin Fa), were led by Emperor Shenzong of Song and the Chancellors Fan Zhongyan and Wang Anshi, while the political conservatives were led by Chancellor Sima Guang and Empress Dowager Gao, regent of the young Emperor Zhezong of Song. Heated political debate and sectarian intrigue followed, while political enemies were often dismissed from the capital to govern frontier regions in the deep south where malaria was known to be very fatal to northern Chinese people (see History of the Song dynasty). This period also represents a high point in classical Chinese science and technology, with figures such as Su Song and Shen Kuo, as well as the age where the matured form of the Chinese pagoda was accomplished in Chinese architecture.

In India, the Chola Dynasty reached its height of naval power under leaders such as Rajaraja Chola I and Rajendra Chola I, dominating southern India (Tamil Nadu), Sri Lanka, and regions of South East Asia. They also sent raids into what is now Thailand.

In Japan, the Fujiwara clan dominated central politics by acting as imperial regents, controlling the actions of the Emperor of Japan, who acted merely as a 'puppet monarch' during the Heian period.

In the Middle East, the Fatimid Empire of Egypt reached its zenith only to face steep decline, much like the Byzantine Empire in the first half of the century. The Seljuks came to prominence while the Abbasid caliphs held traditional titles without real, tangible authority in state affairs.

In Nigeria, formation of city states, kingdoms and empires, including Hausa kingdoms and Borno dynasty in north, Oyo and Benin kingdoms in south.

In Korea, the rulers of the Goryeo Kingdom were able to concentrate more central authority into their own hands than in that of the nobles, and were able to fend off two Khitan invasions with their armies.

Defeat of the Bulgarians by the Byzantines depicted in the Madrid Skylitzes.

Celadon statue of an imperial guardian lion of the Chinese Song dynasty, 11th or 12th century. 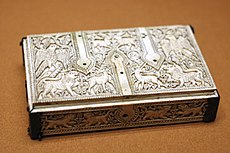 A flat casket carved out of ivory from Al-Andalus (Islamic Spain), c. 1050

A page of the Domesday Book of England.

An 11th-century reliquary of gold and cloisonné over wood, from the Duchy of Brabant, Maastricht Cathedral, now housed in the Louvre. 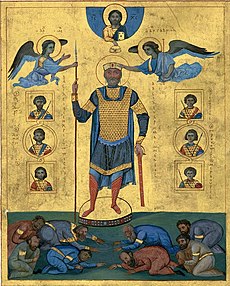 Basil II of the Byzantine Empire.

Angels crowning Canute the Great as he and his wife Ælfgifu of Northampton present the Winchester Cross to the church, dated 1031

The Atlantes – columns in the form of Toltec warriors in Tula.

Lady Sei Shōnagon, wrote her Pillow Book about life in the Japanese court

Statue of William the Conqueror, holding Domesday Book on the West Front of Lichfield Cathedral.

The Gonbad-e Qabus Tower, built in 1006 during the Ziyarid Dynasty of Iran.

Pagoda of Fogong Temple, built in 1056 in Shanxi, China by the Khitan Liao dynasty in 1056. 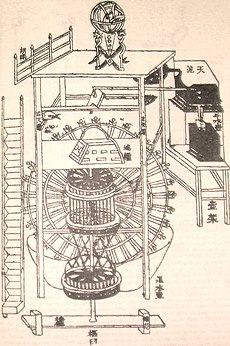 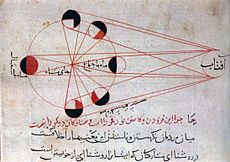 The Ostromir Gospels of Novgorod, 1057.