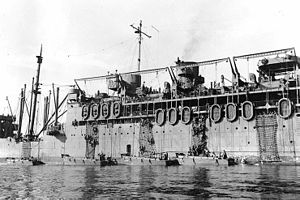 Soldiers climb down netting on the sides of the attack transport USS McCawley (APA-4) on 14 June 1943, rehearsing for landings on New Georgia
File:USSHamblenAPA114.jpg
A Bayfield-class attack transport underway with its complement of landing craft, the USS Hamblen (APA-114)

A troopship (also troop ship or troop transport or trooper) is a ship used to carry soldiers, either in peacetime or wartime. Operationally, standard troopships – often drafted from commercial shipping fleets – cannot land troops directly on shore, typically loading and unloading at a seaport or onto smaller vessels, either tenders or barges.

Attack transports, a variant of ocean-going troopship adapted to transporting invasion forces ashore, carry their own fleet of landing craft. Landing ships beach themselves and bring their troops directly ashore.

Ships to transport troops were already used in Antiquity. Ancient Rome used the navis lusoria, a small vessel powered by rowers and sail, to move soldiers on the Rhine and Danube.[1] 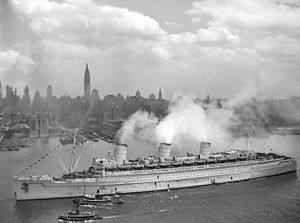 The modern troopship has as long a history as passenger ships do, as most maritime nations enlisted their support in military operations (either by leasing the vessels or by impressing them into service) when their normal naval forces were deemed insufficient for the task. In the 19th century, navies frequently chartered civilian ocean liners, and from the start of the 20th century painted them gray and added a degree of armament; their speed, originally intended to minimize passage time for civilian user, proved valuable for outrunning submarines and enemy cruisers in war. HMT Olympic even rammed and sank a U-boat during one of its wartime crossings. Individual liners capable of exceptionally high speed transited without escorts; smaller or older liners with poorer performance were protected by operating in convoys.

Most major naval powers in the late 19th and early 20th centuries provided their domestic shipping lines with subsidies to build fast ocean liners capable of conversions to auxiliary cruisers during wartime. The British government, for example, aided both Cunard and the White Star Line in constructing the liners RMS Mauretania, RMS Aquitania, RMS Olympic and RMS Britannic. However, when the vulnerability of these ships to return fire was realized during World War I most were used instead as troopships or hospital ships.

RMS Queen Mary and RMS Queen Elizabeth were two of the most famous converted liners of World War II. When they were fully converted, each could carry well over 10,000 troops per trip. Queen Mary holds the all-time record, with 15,740 troops on a single passage in late July 1943,[2] transporting a staggering 765,429 military personnel during the war.[2] 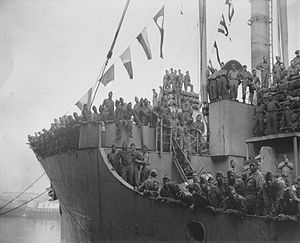 In the era of the Cold War, the United States designed the SS United States so that it could easily be converted from a liner to a troopship, in case of war. More recently, RMS Queen Elizabeth 2 and the SS Canberra were requisitioned by the Royal Navy to carry British soldiers to the Falklands War. By the end of the twentieth century, nearly all long-distance personnel transfer was done by airlift in military transport aircraft.