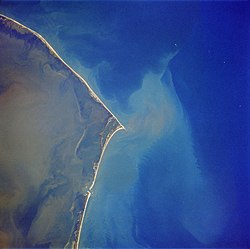 Hatteras Island as seen in a satellite photo. North is to the upper left corner.

Hatteras Island (historically, Croatoan Island) is a barrier island located off the North Carolina coast. Dividing the Atlantic Ocean and the Pamlico Sound, it runs parallel to the coast, forming a bend at Cape Hatteras. It is part of North Carolina's Outer Banks and includes the communities of Rodanthe, Waves, Salvo, Avon, Buxton, Frisco, and Hatteras. It contains the largest part of the Cape Hatteras National Seashore. It is almost entirely in Dare County, North Carolina, though there is a small sliver of about 45 acres (0.18 km2) extending southwest into Hyde County.[citation needed] Settled by Croatoan indigenous peoples, the island was also home to one of the earliest settlements in the Americas by the English, the Roanoke Colony.

The island has a land area of 85.56 km2 (33.03 sq mi) and a population of 4,322, as of the 2010 census.[1] It lies in parts of Kinnakeet Township and Hatteras Township in Dare County, and Ocracoke Township in Hyde County. Hatteras Island is known for sport fishing, surfing, windsurfing and kiteboarding, and Hatteras Village is known as the "Blue Marlin Capital of the World".[2]

The island is one of the longest in the contiguous United States, measuring 42 miles (68 km) along a straight line from end to end, or roughly 50 miles (80 km) along the curve of the land.[2] The Island, because of its function as a barrier island and its low lying profile, has experienced significant coastal erosion because of climate change and related sea level rise.[3][4] Some sections have significantly eroded already, with portions of Hatteras Island at 25% of its original width as of 2014.[5]

The Croatoan Indians were the first human inhabitants of Hatteras Island.[6] The Croatoans were composed of two groups: the Hatterask and the Kinnakeet. As Native Americans were often named by either their main town, their language, or by what they called themselves, Kinnakeet referred to an area on Croatoan Island (modern day Avon) as did Hatterask (modern day Frisco, not modern day Hatteras village).[7] The central village was called Croatoan (council town, which is modern day Buxton), which is why the Native Americans and the Island were referred to by the English as Croatoans from Croatoan.[7]

The story of the missing colony of Roanoke began when John White finally returned to Roanoke on a fifth voyage to the colony, a much-delayed re-supply mission arriving in 1590. At that time, the settlement was found abandoned. The only clues to the colonists' whereabouts were the letters "CRO" carved into the bark of a nearby tree and the word "Croatoan" found carved into the palisade of the fort.[8] It is logical that the colonists left on Roanoke had gone back to Croatoan, as they had already lived there and had had a strong relationship with the natives, some of whom had visited England.

John White, who made maps showing both Croatoan and Roanoke, wrote in 1590:

I greatly joyed that I had safely found a certain token of their safe being at Croatoan, which is the place where Manteo was born, and the savages of the island our friends. [sic][9]

White had instructed them that if anything happened to them, they should carve a Maltese cross on a tree nearby, indicating that their disappearance had been forced. As there was no cross, White took this to mean they had moved to "Croatoan Island" (now known as Hatteras Island). Upon finding the message of CROATOAN carved on the palisade, White also wrote:

The next morning it was agreed by the captain and myself, with the master and others to weigh anchor and go for the place at Croatoan where our planters were for that then the wind was good for that place.[10]

However, he was unable to conduct a search, as a massive storm was brewing and his men refused to go any further. The next day, they instead left the area without looking further for the colonists.[11]

While there are no incorporated places on Hatteras, there are several resort communities along the length of the island. From north to south these are:

For many years, the only ways to reach Hatteras Island was by ferry and footpath.[12]

In November 1963, the Herbert C. Bonner Bridge was completed, connecting Hatteras Island to the northern Outer Banks.[12] The bridge's namesake, Herbert Covington Bonner, was a Democratic congressman who represented the area between 1940 and 1965.[13] The $4 million to build the bridge was financed by the State of North Carolina, the U.S. Commerce Department, and the National Park Service.[13]

From the south, Hatteras is reached by way of a 40-minute ride on the Ocracoke-Hatteras ferry.[12] Presently there is no direct route linking Hatteras Island to the Hyde County mainland, resulting in a 2-3 hour commute around the Pamlico Sound.

During a storm on October 26, 1990, a fishing dredge broke loose from its mooring and destroyed part of the Herbert C. Bonner Bridge, cutting Hatteras Island's only bridge to the north.[14] The bridge was repaired by February 1991.[14]

In 2011, Hurricane Irene destroyed part of Highway 12 between Nags Head and Rodanthe.[12] Until the construction of a temporary bridge in October 2011, the only way of accessing Hatteras Island was by ferry.[15]

In March 2016, the North Carolina Department of Transportation (NCDOT) began construction of a bridge to replace the Bonner Bridge.[16] The replacement bridge, named after Senator Marc Basnight, was opened in February 2019.[17]