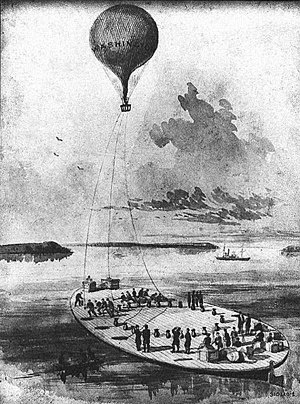 A balloon carrier or balloon tender was a ship equipped with a balloon, usually tied to the ship by a rope or cable, and usually used for observation. During the second half of the 19th century and the early 20th century, these ships were built to have the furthest possible view of the surrounding waters. After several experiments, the type became formalized in the early 1900s, but was soon to be superseded by the development of seaplane carriers and regular aircraft carriers at the beginning of World War I.

The first known usage of balloons from a ship goes back to July 12, 1849, when the Austrian Navy ship Vulcano launched a manned hot air balloon in order to drop bombs on Venice, although the attempt failed due to contrary winds.[1] Later, during the American Civil War, about the time of the Peninsula Campaign, gas-filled balloons were being used to perform reconnaissance on Confederate positions. The battles turned inland into the heavily forested areas of the Virginia Peninsula where balloons could not travel. A coal barge, the George Washington Parke Custis, was cleared of all deck rigging to accommodate the gas generators and apparatus of balloons. From this ship, professor Thaddeus S. C. Lowe, Chief Aeronaut of the Union Army Balloon Corps, made his first ascents over the Potomac River and telegraphed claims of his successful aerial venture. Other barges were converted to assist with the other military balloons transported about the eastern waterways. None of these Civil War craft ever sailed on the high seas.

Balloons launched from ships led to the formal development of balloon carriers, or balloon tenders, during World War I, by the navies of Great Britain, France, Germany, Italy, Russia, and Sweden. About 10 such balloon tenders were built with their main objective being aerial observation posts. These ships were either decommissioned or converted to seaplane tenders after the War.[1]