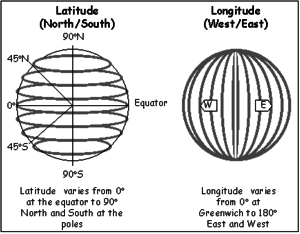 To specify a location on a two-dimensional map requires a map projection.[2]

Main articles: History of geodesy, history of longitude, and history of prime meridians

The invention of a geographic coordinate system is generally credited to Eratosthenes of Cyrene, who composed his now-lost Geography at the Library of Alexandria in the 3rd century BC.[3] A century later, Hipparchus of Nicaea improved on this system by determining latitude from stellar measurements rather than solar altitude and determining longitude by timings of lunar eclipses, rather than dead reckoning. In the 1st or 2nd century, Marinus of Tyre compiled an extensive gazetteer and mathematically-plotted world map using coordinates measured east from a prime meridian at the westernmost known land, designated the Fortunate Isles, off the coast of western Africa around the Canary or Cape Verde Islands, and measured north or south of the island of Rhodes off Asia Minor. Ptolemy credited him with the full adoption of longitude and latitude, rather than measuring latitude in terms of the length of the midsummer day.[4]

Ptolemy's 2nd-century Geography used the same prime meridian but measured latitude from the equator instead. After their work was translated into Arabic in the 9th century, Al-Khwārizmī's Book of the Description of the Earth corrected Marinus' and Ptolemy's errors regarding the length of the Mediterranean Sea,[n 2] causing medieval Arabic cartography to use a prime meridian around 10° east of Ptolemy's line. Mathematical cartography resumed in Europe following Maximus Planudes' recovery of Ptolemy's text a little before 1300; the text was translated into Latin at Florence by Jacobus Angelus around 1407.

In 1884, the United States hosted the International Meridian Conference, attended by representatives from twenty-five nations. Twenty-two of them agreed to adopt the longitude of the Royal Observatory in Greenwich, England as the zero-reference line. The Dominican Republic voted against the motion, while France and Brazil abstained.[5] France adopted Greenwich Mean Time in place of local determinations by the Paris Observatory in 1911.

The "latitude" (abbreviation: Lat., φ, or phi) of a point on Earth's surface is the angle between the equatorial plane and the straight line that passes through that point and through (or close to) the center of the Earth.[n 3] Lines joining points of the same latitude trace circles on the surface of Earth called parallels, as they are parallel to the equator and to each other. The north pole is 90° N; the south pole is 90° S. The 0° parallel of latitude is designated the equator, the fundamental plane of all geographic coordinate systems. The equator divides the globe into Northern and Southern Hemispheres.

Template:Location map-line The "longitude" (abbreviation: Long., λ, or lambda) of a point on Earth's surface is the angle east or west of a reference meridian to another meridian that passes through that point. All meridians are halves of great ellipses (often called great circles), which converge at the north and south poles. The meridian of the British Royal Observatory in Greenwich, in south-east London, England, is the international prime meridian, although some organizations—such as the French Institut Géographique National—continue to use other meridians for internal purposes. The prime meridian determines the proper Eastern and Western Hemispheres, although maps often divide these hemispheres further west in order to keep the Old World on a single side. The antipodal meridian of Greenwich is both 180°W and 180°E. This is not to be conflated with the International Date Line, which diverges from it in several places for political reasons, including between far eastern Russia and the far western Aleutian Islands.

The combination of these two components specifies the position of any location on the surface of Earth, without consideration of altitude or depth. The grid formed by lines of latitude and longitude is known as a "graticule".[6] The origin/zero point of this system is located in the Gulf of Guinea about 625 km (390 mi) south of Tema, Ghana.

Complexity of the problem

To completely specify a location of a topographical feature on, in, or above Earth, one also has to specify the vertical distance from Earth's center or surface.

Earth is not a sphere, but an irregular shape approximating a biaxial ellipsoid. It is nearly spherical, but has an equatorial bulge making the radius at the equator about 0.3% larger than the radius measured through the poles. The shorter axis approximately coincides with the axis of rotation. Though early navigators thought of the sea as a flat surface that could be used as a vertical datum, this is not actually the case. Earth has a series of layers of equal potential energy within its gravitational field. Height is a measurement at right angles to this surface, roughly toward Earth's centre, but local variations make the equipotential layers irregular (though roughly ellipsoidal). The choice of which layer to use for defining height is arbitrary.

In order to be unambiguous about the direction of "vertical" and the "surface" above which they are measuring, map-makers choose a reference ellipsoid with a given origin and orientation that best fits their need for the area they are mapping. They then choose the most appropriate mapping of the spherical coordinate system onto that ellipsoid, called a terrestrial reference system or geodetic datum.

Datums may be global, meaning that they represent the whole earth, or they may be local, meaning that they represent an ellipsoid best-fit to only a portion of the earth. Points on the earth's surface move relative to each other due to continental plate motion, subsidence, and diurnal movement caused by the moon and the tides. This daily movement can be as much as a metre. Continental movement can be up to 10 cm a year, or 10 m in a century. A weather system high-pressure area can cause a sinking of 5 mm. Scandinavia is rising by 1 cm a year as a result of the melting of the ice sheets of the last ice age, but neighbouring Scotland is rising by only 0.2 cm. These changes are insignificant if a local datum is used, but are statistically significant if a global datum is used.[1]

Examples of global datums include World Geodetic System (WGS 84), the default datum used for the Global Positioning System,[n 4] and the International Terrestrial Reference Frame (ITRF), used for estimating continental drift and crustal deformation.[9] The distance to Earth's centre can be used both for very deep positions and for positions in space.[1]

Local datums chosen by a national cartographical organisation include the North American Datum, the European ED50, and the British OSGB36. Given a location, the datum provides the latitude <math>\phi</math> and longitude <math>\lambda</math>. In the United Kingdom there are three common latitude, longitude, and height systems in use. WGS 84 differs at Greenwich from the one used on published maps OSGB36 by approximately 112m. The military system ED50, used by NATO, differs from about 120m to 180m.[1]

The latitude and longitude on a map made against a local datum may not be the same as one obtained from a GPS receiver. Coordinates from the mapping system can sometimes be roughly changed into another datum using a simple translation. For example, to convert from ETRF89 (GPS) to the Irish Grid add 49 metres to the east, and subtract 23.4 metres from the north.[10] More generally one datum is changed into any other datum using a process called Helmert transformations. This involves converting the spherical coordinates into Cartesian coordinates and applying a seven parameter transformation (translation, three-dimensional rotation), and converting back.[1]

To establish the position of a geographic location on a map, a map projection is used to convert geodetic coordinates to two-dimensional coordinates on a map; it projects the datum ellipsoidal coordinates and height onto a flat surface of a map. The datum, along with a map projection applied to a grid of reference locations, establishes a grid system for plotting locations. Common map projections in current use include the Universal Transverse Mercator (UTM), the Military Grid Reference System (MGRS), the United States National Grid (USNG), the Global Area Reference System (GARS) and the World Geographic Reference System (GEOREF).[11] Coordinates on a map are usually in terms northing N and easting E offsets relative to a specified origin.

The Universal Transverse Mercator (UTM) and Universal Polar Stereographic (UPS) coordinate systems both use a metric-based cartesian grid laid out on a conformally projected surface to locate positions on the surface of the Earth. The UTM system is not a single map projection but a series of sixty, each covering 6-degree bands of longitude. The UPS system is used for the polar regions, which are not covered by the UTM system.

Every point that is expressed in ellipsoidal coordinates can be expressed as an rectilinear x y z (Cartesian) coordinate. Cartesian coordinates simplify many mathematical calculations. The Cartesian systems of different datums are not equivalent.[2] 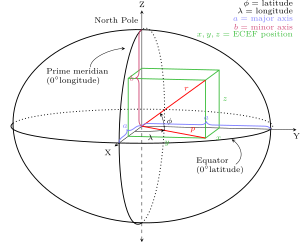 The earth-centered earth-fixed (also known as the ECEF, ECF, or conventional terrestrial coordinate system) rotates with the Earth and has its origin at the center of the Earth.

An example is the NGS data for a brass disk near Donner Summit, in California. Given the dimensions of the ellipsoid, the conversion from lat/lon/height-above-ellipsoid coordinates to X-Y-Z is straightforward—calculate the X-Y-Z for the given lat-lon on the surface of the ellipsoid and add the X-Y-Z vector that is perpendicular to the ellipsoid there and has length equal to the point's height above the ellipsoid. The reverse conversion is harder: given X-Y-Z we can immediately get longitude, but no closed formula for latitude and height exists. See "Geodetic system." Using Bowring's formula in 1976 Survey Review the first iteration gives latitude correct within 10-11 degree as long as the point is within 10000 meters above or 5000 meters below the ellipsoid. 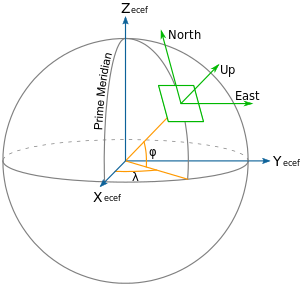 In many targeting and tracking applications the local East, North, Up (ENU) Cartesian coordinate system is far more intuitive and practical than ECEF or Geodetic coordinates. The local ENU coordinates are formed from a plane tangent to the Earth's surface fixed to a specific location and hence it is sometimes known as a "Local Tangent" or "local geodetic" plane. By convention the east axis is labeled <math>x</math>, the north <math>y</math> and the up <math>z</math>.

Also known as local tangent plane (LTP). In an airplane, most objects of interest are below the aircraft, so it is sensible to define down as a positive number. The North, East, Down (NED) coordinates allow this as an alternative to the ENU local tangent plane. By convention, the north axis is labeled <math>x\prime</math>, the east <math>y\prime</math> and the down <math>z\prime</math>. To avoid confusion between <math>x</math> and <math>x\prime</math>, etc. in this web page we will restrict the local coordinate frame to ENU.

On the WGS84 spheroid, the length in meters of a degree of latitude at latitude φ (that is, the distance along a north–south line from latitude (φ − 0.5) degrees to (φ + 0.5) degrees) is about

Similarly, the length in meters of a degree of longitude can be calculated as

(Those coefficients can be improved, but as they stand the distance they give is correct within a centimeter.)

An alternative method to estimate the length of a longitudinal degree at latitude <math>\scriptstyle{\varphi}\,\!</math> is to assume a spherical Earth (to get the width per minute and second, divide by 60 and 3600, respectively):

where Earth's equatorial radius <math>a</math> equals 6,378,137 m and <math>\scriptstyle{\tan \beta = \frac{b}{a}\tan\varphi}\,\!</math>; for the GRS80 and WGS84 spheroids, b/a calculates to be 0.99664719. (<math>\scriptstyle{\beta}\,\!</math> is known as the reduced (or parametric) latitude). Aside from rounding, this is the exact distance along a parallel of latitude; getting the distance along the shortest route will be more work, but those two distances are always within 0.6 meter of each other if the two points are one degree of longitude apart.

Geostationary satellites (e.g., television satellites) are over the equator at a specific point on Earth, so their position related to Earth is expressed in longitude degrees only. Their latitude is always zero (or approximately so), that is, over the equator.

On other celestial bodies

Similar coordinate systems are defined for other celestial bodies such as: