Box is a large village and civil parish in Wiltshire, England, about 3 miles (5 km) west of Corsham and 5 miles (8 km) northeast of Bath. Besides the village of Box, the parish includes the villages of Ashley and Box Hill; Hazelbury manor; and the hamlets of Alcombe, Blue Vein, Chapel Plaister, Ditteridge, Henley, Kingsdown, Middlehill and Wadswick. To the east the parish includes much of Rudloe, formerly a hamlet but now a housing estate, and the defence establishments and related businesses on the site of RAF Rudloe Manor.

Occupation here dates back at least to Roman times. The area is known for its fine stone and for centuries Box quarries were famous for their product. Today Box is perhaps better known for its Brunel-designed Box railway tunnel.

Box has been twinned with Sorigny, a commune in central France, since 2016.[3]

Position of Box in Wiltshire

Box lies in Wiltshire, close to the border with Somerset (roughly 1.0 mile (1.6 km) away as the crow flies) and Gloucestershire (about 1.9 miles (3.1 km) away). The place where the three counties meet is marked by the Three Shire Stones.

The settlements in Box are on higher ground above the steep-sided valley of the Bybrook river, a tributary of the Bristol Avon. Limestone rock is found in much of the parish. Box Ground, a hard-wearing variety of Bath stone, was extracted at quarries such as Box Mine which are now closed. As of 2015 the remaining source of Box Ground is Hartham Park quarry at Corsham.[4]

The southern boundary of the parish follows the Roman road from Silchester to Bath. The road through Box village, descending to Bathford and Bath, was turnpiked in 1761 to provide a route from Chippenham and Corsham to Bath; this became the present A4.[5]

A large part of Box village and the area around it in Box parish is in the Cotswolds Area of Outstanding Natural Beauty.[6] Box also falls in the easternmost part of the Avon Green Belt.

Prehistoric settlements in the area were hilltop forts such as Bury Camp, 4 miles (6 km) north of present-day Box village. There is evidence in the form of numerous re-used standing stones that there may have been a stone circle on Kingsdown.[7]

The Romans built the Fosse Way about 2 miles (3.2 km) to the west. Near the present-day Box church is the site of a Roman country house[8] which was excavated during the 19th century, again in 1902-1903 by Harold Brakspear, and again in 1967–1968. There was a major rebuilding in the late 3rd or early 4th century which changed it into the largest villa in the Bath area. The villa had one of the richest collections of mosaic floors of any building in Roman Britain, with remains found to date in 20 rooms, there being 42 rooms positively identified in the main villa and 15 more under investigation. Room 26 appears to be a major presence chamber in the manner of that at Trier.[9] A villa such as this would have been the centre of a large estate and the focus of interest for at least six possible subsidiary villas or farmsteads at Ditteridge, Hazelbury[10] and Shockerwick (near Bathford) and those further afield at Colerne, Atworth, and Bradford on Avon. In 1086 the Domesday Book recorded 25 households at Hazelbury[11] and six at Ditteridge.[12]

The earliest record of Box is from 1144 when Humphrey II de Bohun was a landowner.[5] The village is shown on a 1630 map and by this time cloth weaving was an important home-based industry, supplying clothiers in nearby towns such as Bradford on Avon.[5]

Springfield House was built in 1729: formerly a workhouse and a school, the three-storey building has been converted into flats.[13]

The Great Western Main Line railway (from London to Bristol and the South West) crosses the parish, and the Box Tunnel, 1.83 miles (2.95 km) long, was built under Box Hill. Construction took place between 1838 and 1841 with up to 4,000 men were employed. At first Box station was built close to Ashley, where the A4 crosses the line; Box Mill Lane station was built a mile closer to Box village in 1930. Both stations closed in 1965 when local services were withdrawn.

Origin of the place-name

Early documented forms of the name include (Latin) Bocza and (English) Bocks, Boekes and even Books. "The origin is very obscure" (Kidston).[15]

Local lore that the name is derived from the Box bush Buxus sempervirens is improbable.[16] There is no supporting evidence at all, and Buxus is not native to the area. There is, however, a connection with beech. Box (Wilts), Box (Glos), Box Hill (Surrey) and places such as Boscombe (Wilts) and Le Bosc (France) all feature extensive beech woods growing on various limestones.

Stone found in the archaeological investigation of Box Roman Villa is of local origin and Roman masonry may be seen at the base of the wall between the church of St. Thomas a Becket and Box House.[17]

Legend has it that St Aldhelm, Abbot of Malmesbury (c. 639-709) threw his glove on Box Hill, saying, "dig here and you will find treasure". Box stone was used for the construction of Malmesbury Abbey in the late 7th century.

Stone quarried in the parish was used in the late 12th and early 13th centuries for the abbeys at Stanley and Lacock, and in the 15th and 16th for Great Chalfield Manor and Longleat House.[5]

Transport of stone was improved in 1727 when the Avon was made navigable between Bath and Bristol, and again in 1810 when the Kennet and Avon Canal provided a route from Bradford to London. The railway made transport much cheaper, and the excavation of the tunnel revealed vast beds of stone on both sides of the line.[5] Underground quarries were carved out between Box and Corsham, with stone carried by narrow-gauge railways to yards at Box and Corsham stations.[18]

The peak period for quarrying was between 1880 and 1909 when millions of tons of stone was cut. The quarries continued working until 1969.[5] As of 2015, quarrying continues on a smaller scale at Corsham,[19] where the Box Ground stratum has been re-encountered at a lower level in the Hartham quarry, from which the stone for the obelisk at the Box Rock Circus (below) was extracted.

RAF Rudloe Manor, a headquarters site handling intelligence and directing operations, was established in the far east of the parish in 1940. Until 1945, critical functions were housed underground in a worked-out quarry, Brown's Quarry, to the north of Tunnel Quarry.[20]

Underground in the same area, Spring Quarry was requisitioned in 1940 in order to create a shadow factory for aircraft engine manufacture, following the bombing of the Bristol Aeroplane Company at Filton. Construction took longer than expected and little production was achieved before the site closed in 1945.[21] Artist Olga Lehmann was invited to paint murals in the workers' eating areas; in 2013 these were designated as Grade II* listed.[22]

Between the late 1950s and 2004, Spring Quarry served as the Central Government War Headquarters, a self-sufficient government headquarters for use in the event of a nuclear conflict.

Box Mine became a biological Site of Special Scientific Interest in 1991. 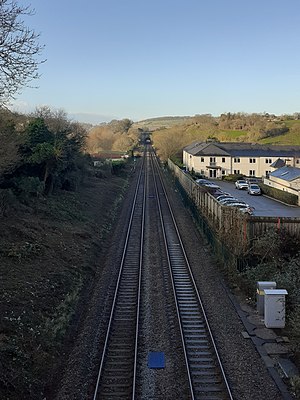 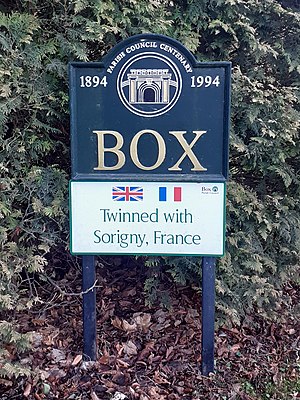 The civil parish elects a parish council. It is in the area of Wiltshire Council unitary authority, which performs all significant local government functions.

The parish falls within the Box and Colerne electoral ward, which starts in the south at Box and stretches north to Colerne. The ward's population taken at the 2011 census was 5,200.[23]

There were Saxon churches at Ditteridge and Hazelbury, and possibly at Box.[24] The Church of St Thomas à Becket in Box has 12th-century origins. Although nothing is currently visible, it has been posited[25] that the chancel stands over the 5th century house-church of the Roman villa (above), in analogy to the villas at Lullingstone and Chedworth.

Alterations were made in the 14th century and a bell chamber and octagonal spire in the "decorated" style were added to the Norman tower in the 15th. Further restoration began in 1713 and in 1831 the church was extended with a south aisle; the interior was restored in 1896-7 by H.W. Brakspear. In 1960 the building was designated as Grade I listed.[26]

There are four bells. Two were recast by Taylors in 1936 and two are pre-reformation, notably the Sancta Katerina tenor bell which is thought to be a Bristol bell of about 1485.[27][28]

The church of St Christopher, Ditteridge stands over a former Saxon church. It was rebuilt by the Normans and re-dedicated in 1087. It consists of a single nave and chancel and is Grade I listed.[29]

A single bell hangs in an external bellcote. Although the bell has no inscription, the casting detail suggests a bell of the 14th century, probably cast locally.

The church of All Saints, Hazelbury fell into disuse before 1540. It was located on a knoll in an area north of Hazelbury Manor shown on the 17th century map as "Olde Church Feilde". Excavation by Kidston in the early 20th century indicated a single-cell church with a semi-circular apse at the east end. The stone sarcophagi now at St Thomas a Becket came from here. Kidston notes that carved masonry from the church was re-used in Hazelbury Manor.[30]

Chapel Plaister has a small roadside church, rebuilt in 1340 and linked to a hostel for travellers; it is also Grade I listed.[31]

The location of the Chapel of St David at Fogham mentioned in Kidston [15] has not been discovered. 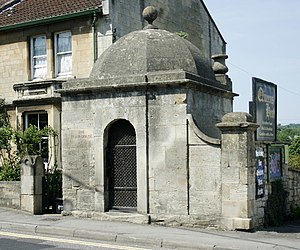 Box is home to Box Church of England Primary School. The earliest school was established near the church in 1708; the present building on the High Street is from 1875.[36] Pevsner describes it as "Gothic, with a terrible, spindly tower".[37]

The Selwyn Hall (built 1969) is used for community functions and houses the village library.[5]

The village has sporting facilities including a lawn bowling green, two tennis courts, a cricket pitch, a football pitch and even a small basketball area. These are all located in or around the Recreation Ground (a piece of land with an area of about 4.4 hectares).

Also on the recreation ground is the unique 'Box Rock Circus', a 22 ft (6.7 m) diameter circle which is an earth-science educational facility.[38] It was constructed during 2012 by local craftsmen with stone donated by numerous companies and funded principally by landfill tax funds. The facility was formally opened on 14 May 2013 by Professor of Geosciences Communication, and television personality, Iain Stewart.